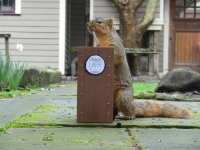 A spokesanimal presents the LAPH statement.

Although I wouldn’t consider myself a humorist, I do appreciate a good laugh and often favor satire as a way of adding levity to a heavy situation. This is what prompted me recently to write a short story to post on NextDoor. It was a success, with many neighbors appreciating the humor, but creating the piece was equally satisfying.

After writing a first draft, I started to get a bit of interest from my wife and daughter, but the idea wasn’t grabbing them. The story needed the right visual to make it click. I started with the Internet, hoping to find an image of an animal standing at a podium; no luck. Not being a Photoshop expert, I decided to capture my own photo.

I quickly put together a “podium,” roughly sizing it to the intended user. My daughter created the podium’s medallion. Setting the prop in our backyard, I loaded it with sunflower seeds, aimed a remote-controlled camera, and waited. After a surprisingly long time, given the attractiveness of the bait, my subject arrived and became the star of my story.

Upon posting it, the reaction was uplifting—lots of laughing emojis and positive comments. One guy messaged me stating he was forwarding the story to friends in Europe. Enjoy:

In an unprecedented display of solidarity, Cleveland Heights-area wildlife today issued a statement in response to the COVID-19 pandemic. In part, the statement read,“Our relationship with human life has always been tenuous, but we are here today to set aside our differences and show our support for the people of the Heights and all of humanity.”

Having officially organized themselves as Local Animals for the People of the Heights (LAPH), the coalition assembled in a Grandview Avenue yard for a well-choreographed public statement. Led by the nominated “spokesanimal,” a squirrel from the Forest Hill neighborhood, the statement was read amid a somber atmosphere.

“We understand that sometimes people get annoyed with our behaviors, and often the feeling is mutual,” the squirrel read. “But we think it’s important for everyone to know that, in these trying times, the local animal community stands with our neighbors.”

Many area residents were surprised but comforted by the unusual coalition. “Seeing all of those animals standing together behind that podium was a very emotional moment for me. The deer, squirrels, raccoons, skunks, even the coyotes were there. I never knew, until this moment, how much they cared about us,” said a Queenston Road resident, who watched the event on YouTube from the safety of her living room.

“There have been many times when I have cursed the deer running rampant on my street, but how can I hold a grudge after such a display of encouragement for people like me? It was beautiful,” stated a Derbyshire Road resident.

Garnering the support from all local animal species was said to have taken considerable effort. “It was all or nothing; I mean, it wouldn’t look sincere if everyone but the skunk was onboard,” stated a chipmunk, revealing some of the tension behind the historic event.

“Look, all I’m saying is, sometimes I get the feeling I’m not welcome here in the Heights,” a skunk explained. “But in the end, I admit, if it weren’t for human trash on treelawns, I would have a tough time making it here, so I eventually voted to go along with the idea.”

The LAPH statement concluded with words of optimism and encouragement: “We, too, have seen times of trial, times of fear and times of want; but with every long, cold winter, comes a nourishing spring, with vegetable gardens to plunder, trash bags to invade and shrubbery to ravish; have faith, human friends, your days of plenty will return.”

Mike Bier is a graduate of Heights High and a member of the FutureHeights Board of Directors.