The fruits of my labor 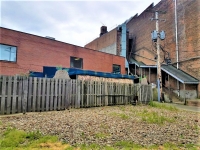 The b-side of the B Side, you might say. This is where Rocco's Market isn't. Part of the lot on which Rocco's sat is empty and part is the fenced-in patio of the B Side Lounge, which is downstairs of the Grog Shop, whose entrace is on Euclid Heights Boulevard, in the CoventrYard building.

They built CoventrYard, the then-arty indoor mini-mall, out of an old apartment building, on Coventry Road, just as it’s starting to turn the corner and become Euclid Heights Boulevard. Then my friend Eugene Rocco, a builder and designer who loves good food, took over what had been the apartment’s garage and transformed it into a beautiful gourmet shop, Rocco’s Market, directly across the courtyard from the original Mad Greek Restaurant.

Rocco, at around that same time, the mid ’70s, also designed the Grum’s Sub Shoppe on Coventry, near Mayfield. It’s still there. The next time you’re in the area, look at it, starting on the outside and following your eyes inside. It’s very cleverly designed. As was Rocco’s Market.

Rocco’s sold unusual fruits, for its time; Amish cheeses and baked goods from Middlefield, Ohio; fresh fish and seafood; dairy products; and all kinds of deli meats—even cow’s tongue (it tastes sort of like corned beef)—which you could buy in bulk or get on sandwiches, which were made with bagels from Bialy’s.

I was a full-time rock musician then, which pretty much meant I had to have a full-time job doing something else. So, I went to work at Rocco’s. I spent my days there and my nights rehearsing or performing music. I used to take food home from there for dinners and off-days—like my favorite sandwich at that time: roast beef, turkey and Genoa salami, with Swiss cheese, tomato and Chef Budino’s special sauce, on a half-and-half bagel; and some things that were getting too old to sell at the market. I was probably the only—or certainly one of few—starving musician anywhere who ate lobster once or twice a week.

By the way, Chef Budino’s special sauce came about when some dignitary (I can’t remember who—possibly a local TV news anchor) wanted something with our special sauce. We didn’t have a special sauce. So, I whipped up a concoction of all the condiments we had—ketchup, mustard, mayo, pickle relish and horseradish—slapped it on his sandwich, and he loved it. And then some people standing nearby wanted to try it on their sandwiches, and they loved it, so it became a standard item. Named after me. If I had been Italian.

And this was typical of another co-worker, Antonio, a retired man in his 70s: When he found a lot of milk on the bottom of the dairy case, he announced that he was going to take out all the cartons and weigh them, and whichever one weighed less would be the one that was leaking. “That,” he proclaimed, “is what you call ‘elimination of process’.”  Then he weighed them all and silently put them all back. “What did you find out?” I asked him. He said, “They all weigh the same, except for one. And that one weighs more.”

We used to receive the Amish cheeses in large slabs and it was Antonio’s job to slice them up and wrap the individual pieces. He amused the hell out of the group of young construction workers who came in every day for lunch when he told them, “I cut the cheese every afternoon at two.”

I was also the resident wise guy. A fancily dressed and coifed woman asked me, “When do you carry fish?” I said, “When they’re too tired to swim.” She looked at me, couldn’t think of what to say, and walked away.

I did that all day, every day. Then my father started hanging around on Saturday afternoons, heckling me when I was working behind the deli counter. Like when a man ordered a tongue sandwich. My father said, “Yuck! I wouldn’t eat anything that came out of an animal’s mouth. I'll have some egg salad.”

The place closed after a few years. And I became a writer, and also a part-time chef, in addition to my music. I write mostly about music and food, naturally. In fact, I’m writing a book now that’s a hybrid music-history/cookbook. I also got an idea for a novel when I was working at Rocco’s, which I finally wrote last year, picturing that market the whole time. Working there was fruitful.