Project inspires hope, one letter at a time 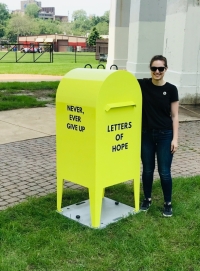 Allison Meyer with the mailbox at Hart Crane Park, in summer 2019. (Photo courtesy of Canalway Partners)

Cleveland Heights resident Allison Meyer is not one to give up.

She wants to help others find the kind of hope that sustained her after her mother’s untimely death, and through a career change, law school and anxiety about telling her story.

Meyer created Never, Ever Give Up Cleveland as a storytelling and inspirational platform where people can describe how they persevered through life’s challenges. The project collects and shares anonymous stories, all responding to the prompt: What is the hardest thing you ever had to do?

“If you don’t tell people what’s going on and let someone help you carry the burden, you’re left to carry it yourself and it can get really heavy,” said Meyer. “The courage to share about your hard times might just help someone else find hope.”

When she launched the project in 2018, she hadn’t counted on readers reacting to the stories by sharing their own experiences, as well as support for the writers. Since then, more than 700 stories and responses have come through the website www.neverevergiveupcle.com, as well as Instagram, Facebook, e-mail, and at events. They've also been dropped in a special mailbox.

In 2018, Meyer didn’t know what to expect when she took the open mic stage at a Story Club Cleveland event. Her mom had died two years earlier. Meyer, who had grown up in Strongsville, had left a job in Chicago, moved to Cleveland Heights, and started law school at Case Western Reserve University.

Meyer hadn’t talked about her mom much until that night. “It was really hard, and I didn’t have the tools,” she said. The open mic seemed a safe place, even though the room full of strangers terrified her. When it was over, people thanked her, cried on her shoulder and bought her a drink.

“A big part is that we all live in Northeast Ohio, we are all in it together. People in Cleveland and surrounding cities are like that,” she said.

The project began to take shape in her mind and on Instagram. “As I started getting stories, I thought this might work,” said Meyer. “People wanted to have someone really see them.”

The response gave her courage to present the idea in early 2019 at Accelerate: Citizens Make Change, an annual civic pitch competition presented by the Cleveland Leadership Center and Citizens Bank. She was chosen as one of five finalists out of some 30 pitches. The experience and $2,000 prize gave her momentum and connections.

It also cemented an idea. “Readers were inspired by these stories, and if you want to collect letters of hope, you need a mailbox,” Meyer said.

At 5 feet tall, the bright yellow mailbox is hard to miss. Meyer loaded it and the 250-pound slab it sits on into her SUV last summer, and installed it in Hart Crane Park along the Cuyahoga River, during the 50th anniversary observation of the river’s fire. People were grateful to write and “mail” their stories.

She brought the mailbox to Accelerate in February 2020, and, in April, it was prominently displayed in front of the Coventry Village Branch of Heights Libraries.

“It was the perfect project at the perfect time,” said Sheryl Banks, communications manager for Heights Libraries, noting it was so successful that it remained on site a week longer than planned. “Everyone is feeling the strain of the pandemic, emotionally and economically, so hope and kindness are exactly what we all need right now. It really became a beacon of hope.”

The mailbox is now in the Uptown section of University Circle—with letters displayed at the Cleveland Visitors Center. It is scheduled to move to Wade Oval next, for the summer.

Meyer does not plan to give up on the project now that she’s a law school grad. “Lawyers are people who listen to the stories of others, so I know stories will continue to be part of my future,” she said.

The project is collecting letters of hope in response to COVID-19. Meyer is working on a book compilation of the submissions, the profits of which she intends to donate to a local mental health organization, to help clients tell their stories. “It’s a great way to build community and empathy, and we want more people to be inspired by these contributions,” she said.

And Meyer envisions a big yellow mailbox in every community.

“Maybe there’s a giant one downtown, and Cleveland becomes known as this place that really encourages people to support others in their struggles,” Meyer suggested. “You don’t get a trophy for dealing with trauma and pain. But you can reach back and share wisdom and insights you’ve gathered. That’s a trophy for helping someone else.”

Michael Bennett is a 30-year resident of Cleveland Heights, where his two children attended Heights schools. He is vice president of external affairs at the Cleveland Leadership Center.