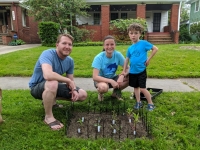 If you went down Bradford Road last summer, you may have noticed some interesting tree lawn activity—and it wasn’t on trash night.

With guidance from residents Peggy Spaeth and John Barber, neighbors collaborated on a project—now the Bradford Pollinator Path—to beautify the street while helping the environment. Participating households agreed to dedicate a patch of their front yards or tree lawns to the planting of native species that are known to be supportive ecosystems for insects and birds.

Having transformed their own front yard and tree lawn into a biodiverse habitat, Spaeth and Barber, the co-founders of Friends of Lower Lake, wanted to increase the impact by expanding it on their street. In February 2019, Spaeth e-mailed neighbors via the street’s listserve, thinking she would get a couple of households for the first year. There was a swell of interest, with 17 households ultimately participating.

Spaeth hosted a meeting for interested neighbors, explaining the simple process of starting a small patch of pollinating plants, photos of which she shared via e-mail and at the meeting. She connected neighbors with The Nature Center at Shaker Lakes’ annual plant sale—which features native plants—consulting if anyone asked for advice.

Bradford resident Karl Weisel said, “The work was worth it when I saw a monarch going from plant to plant.” His wife, Diane Perl, noted that they have enjoyed “not only the flowers, but the variety of insects” the plants attracted. “It’s been interesting to see what people planted and how the plants progressed,” she added.

Molly Burke, another Bradford resident, said, “We do feel differently when we think about our yard now. Our son, Alex, is especially vigilant in reminding us to go native. We plan to expand our tree lawn garden this year.”

The results have been beautiful and inspiring, producing increased social connection among neighbors, as well as among bees and butterflies.

The enthusiasm has proven contagious. Inspired neighbors on adjacent streets (East Fairfax and East Monmouth) are establishing their own pollinator paths this spring.

Originally, Bradford Road participants displayed a street-specific sign in their pollinator patches, denoting their part in the project. Now that the project has spread to other streets, said Spaeth, “Meredith Hahn on East Monmouth has designed a Heights Pollinator Pathway sign for anyone to use. It made sense to create a regional sign rather than different ones for each street.”

Spaeth and Barber created a short video about starting a pollinator path, which can be viewed at www.youtube.com/watch?v=C5285WignaQ&feature=youtu.be.

Mostly a mom, Shari Nacson is a Bradford Road resident who works as a freelance editor, social worker, and nonprofit consultant. More than anything, Nacson is inspired by kids and adults who build connection through kindness.