CH crime rates drop for 7th year in a row 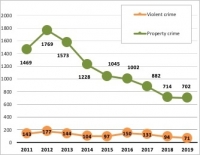 For the seventh consecutive year, the incidence of serious crime in Cleveland Heights continued to drop in 2019, hitting its lowest level since the police department began keeping credible statistics in 2011.

The number of burglaries jumped last year to 114 from just 63 in 2018. But, that’s due to a change in the way incidents are being classified, according to Cleveland Heights Police Chief Annette Mecklenburg.

The FBI, which is in charge of compiling nationwide crime statistics, has a rigorous set of guidelines for categorizing incidents. Beginning in 2021, the burglary category will be expanded to include breaking-and-entering. Mecklenburg said the CHPD began using the new standard this year. Under the old standards, the number would have been 58—down from the year before.

Mecklenburg attributes the positive trend to improved monitoring of criminal activity, and targeting areas in the city where data show pockets of crimes.

“We have found that, many times, offenders will continue to commit these crimes until they are apprehended,” she said. “Our detectives work very hard to solve their cases, and when we are able to make an arrest, we are ultimately preventing that offender from continuing to commit future crimes.”

Reporting crime data to the FBI is voluntary, and there are large disparities from one community to the next in the quality of the nuanced classification process. As a result, the data don’t allow for valid comparisons between one city and another. Further, FBI guidelines limit the statistics to major crimes—so the reports don’t include numerous lesser offenses.

The CHPD has maintained consistent standards for its data since it began taking the job seriously after 2010, so its statistics can be used to compare what's happening within the city from one year to the next.

So far this year, the positive trend appears to be continuing. In the first three months of 2020, the department reported 10 violent crimes and 121 property crimes—well below the ordinary quarterly average. With the statewide stay-at-home order that began in mid-March, that's likely to continue.

“Probably one of the most notable crimes we are not seeing at this time is burglary,” Mecklenburg said. “I believe with more and more people staying home, it is not as tempting for criminals to break into homes since the likelihood of someone being at home has increased.”

However, crime is seasonal, tending to increase in warm weather.

The data cited here is available on the CHPD website at www.clevelandheights.com/369/statistics.