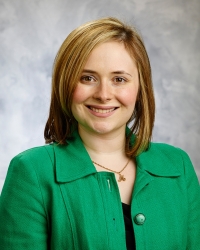 Melissa Yasinow in a photo from her 2017 CH City Council campaign.

Yasinow provided no explanation for her resignation.

Reading from a prepared statement in which she addressed residents of Cleveland Heights, Yasinow said, “It has been an honor and a privilege to have served you these past six years. Being a member of this council has been one of the highlights of my professional life. I am grateful to have worked with my colleagues, past and present, and with this city’s qualified, competent and professional staff. I'm also enormously proud to have been part of the team that made Top of the Hill a reality. This is a goal that has eluded our city for over 50 years, and now we are set to break ground."

In their March Heights of Democracy column, published by the Heights Observer on Feb. 26, Deborah Van Kleef and Carla Rautenberg reported that Yasinow’s Cleveland Heights home was scheduled to go on the market on Feb. 27, and that a Chagrin Falls home that she and her husband had contracted to purchase in December, with a March 3 closing date, was no longer on the market.

CH City Council has not yet announced plans, nor a timeline, for filling the council vacancy.

Mayor Jason Stein said on March 3 that Yasinow had not shared with him her intentions to resign, prior to her announcement at the beginning of the March 2 council meeting. Therefore, council has not yet had an opportunity to discuss filling the vacancy. He said that council would discuss the process and timeline at its March 9 Council Committee of the Whole meeting.

Vice Mayor Kahlil Seren confirmed that he had no advance notice of the resignation. He said that, although there is no mandate that council fill the vacant seat and no deadline for doing so, he expected that council would not want to leave a seat open for what would amount to almost two years, and that they would likely use a process similar to one they had used to appoint Craig Cobb to an open seat in 2019. “I’m hoping we can do it a lot faster this time,” he said.