Top of the Hill Project advances

by Robert Brown and Christopher Jacobs 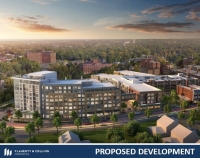 A rendering of the Top of the Hill project presented by Flaherty & Collins in October 2019.

On Jan. 27, in a three-hour meeting that ended at 10 p.m., the Planning and Development Committee of Cleveland Heights City Council considered two funding-related ordinances that advance development of the mixed-use project known as Top of the Hill (TOH).

In February 2018, CH City Council entered into a development agreement with developer Flaherty & Collins Properties to build TOH. After two years of work and more than 40 meetings with residents, property owners, businesses and various city departments, approval of the two funding ordinances is the final step before groundbreaking, anticipated this spring.

Council discussed the two ordinances at length at its Council Committee of the Whole meeting on Jan. 13, and both had first readings at the Jan. 21 city council meeting.

One ordinance (5-2020) authorizes the city to issue $26 million in Tax Increment Financing (TIF) bonds. The bonds will be fully paid by the developer from payments that would normally be made as property taxes on the increased value of the property. (TIFs are commonly used development incentives, used in Shaker Heights for the Van Aken development, for example.)

The CH-UH City School District will continue to receive the same real estate tax revenue that it does now for the parking lot, approximately $20,000 a year. The school district agreed to the TIF; in exchange, the developer agreed to pay the school district an additional $400,000 per year as “payment in lieu of taxes”—a common feature of TIF agreements with school districts.

The second ordinance (6-2020) authorizes the city to issue non-tax revenue bonds of no more than $1.85 million as the city’s contribution to the project. City Manager Tanisha Briley and the city’s bond counsel, Jeff Bomberger of Squire Patton Boggs, explained that these bonds would be repaid from project-related fees received by the city, including fees for licenses and permits, not tax revenues.

At the Jan. 27 meeting, Council Member Mike Ungar, chair of the Planning and Development Committee, read aloud questions that residents had e-mailed to the committee; the developer’s representatives, city staff, and the city’s legal and economic development consultants responded to the questions.

Council Member Davida Russell reiterated her support for a provision that has been added as an exhibit to ordinance 5-2020, requiring the developer to make best efforts to hire minority-owned and female-owned contractors, with a workforce that maximizes demographic diversity and the employment of local residents at prevailing wage levels for construction jobs. [According to City Manager Briley, "this information is in the term sheet and is . . . still in flux."]

The $84-million TOH project, located on four acres of land at the intersection of Cedar Road and Euclid Heights Boulevard, will include 261 market-rate apartments, garage space for approximately 550 cars for residents and businesses, 11,400 square feet of storefront retail space along Cedar Road, and 25,000 square feet of green space, including a public gathering space adjacent to Nighttown.

The parking lot that TOH will replace has remained undeveloped since the eight-story Doctors’ Hospital was demolished in 1968, and has been the subject of past development proposals.

TOH construction will begin with a parking garage that will serve those who now park in the surface lot, as well as future residents and customers of the proposed development.

Ungar has expressed strong support for the project and has stated that it has been “thoroughly vetted by our professional staff and by a team of highly skilled and experienced professionals, as well as through a robust community engagement process.”

CH City Council plans to hear second readings of both ordinances on Feb. 3, and council may take final action at its Feb. 17 meeting, on third reading of the ordinances.

Robert Brown is a city planner with 40 years of experience, including nine years as Cleveland's City Planning Director. He has been a resident of Cleveland Heights for more than 40 years. Christopher Jacobs is partner with Renner, Otto, Boisselle & Sklar, LLP and a longtime Cleveland Heights resident. Both serve on the FutureHeights Board of Directors.