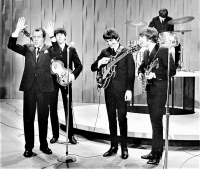 Feb. 9, 1964. I was one of 73 million people watching "Ed Sullivan" that night. My downstairs neighbors were watching "Walt Disney's Wonderful World of Color," but they were hearing the Beatles, from my TV.

The Budins moved into a house on Washington Boulevard, three houses behind the plot of land on which the Coventry Library was being constructed. The first Cleveland Heights library was located across the street, inside Coventry School, starting in 1911. The Coventry Library building opened in 1926, the year my father started kindergarten at Coventry. His kindergarten teacher was Miss McClelland, who was also my kindergarten teacher there, 28 years later. Most people knew my father as Joseph. Family and close friends called him Joe. Miss McClelland, the few times I can remember my father coming into my kindergarten class, still called him Joey.

After they had lived in that house on Washington for a couple of years, my grandfather, who was always kind of restless, came home one day and announced to my grandmother that he wanted to build a new house near what is now Cedar and Taylor. My grandmother refused. She said, “I’m not moving out to the country!”

My father’s family needed to downsize during the Depression, so they moved three or four times while he lived with them, but always stayed in Cleveland Heights, and always close to Coventry Road. My father attended Coventry Elementary, Roosevelt Junior High and Heights High—except for a few weeks when he was about 16 and stole the family car and ran away to Florida. I have a Cleveland Plain Dealer article about that from back then. My grandmother, who spoke very little English, and didn’t speak it very well, was “quoted” as saying, “He spoke often of going to Hollywood to write music and act.” I doubt that she said that, but someone must have told the reporter something like that.

He did enjoy playing the sax. He was a member of the Heights High Marching Band and he began music school after high school, but in the middle of his second year, the Japanese attacked Pearl Harbor and the U.S. entered World War II. And rather than wait to get drafted into the Army, my father enlisted in the Navy—because, he said, he hated walking.

After the war, he didn’t go back into music. But I remember him walking around the living room and dining room playing his sax. It was an instrument that his oldest brother, who was born in 1910, had played as a kid. When my older brother went to Roosevelt Junior High, he played that sax in the school’s band. And when I went to Roosevelt, I played it in the band, too. In fact, when my daughter was about 12, she decided she wanted to learn how to play the sax, so she took some lessons, on that instrument. I still have it. I have grandchildren, you know . . .

It was convenient that my father always lived near Coventry Road, because when my parents started dating, in junior high, my mother lived on Coventry Road. She lived there until my father got stationed in San Francisco during the war and she moved out there, at 19, to marry him.

They stayed there for a few years, and my older brother was born there. But then my father’s brother, David—the one who had played that saxophone—died, six months before I was born, and when my father came home for the funeral, he decided to move the family back here. And that’s why I was born here, and why my name is David, and why I played the sax. But it’s not why I went into music for a living.

I think I made that decision when I was in the ninth grade and my parents went out to dinner when my father turned 43, one Sunday night, leaving me home to turn the TV’s volume up as loud as I wanted, for the Beatles’ American debut, on "The Ed Sullivan Show."

That was an event that changed the lives of everyone around my age who became a professional musician. And that’s how I remember my father’s birthday was in February.