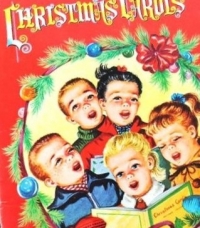 When I was 4 years old, I started going to nursery school in a big house on Taylor Road, between Shannon and Bendemeer roads. The women who ran it were nice, but I hated going there, just like I hated going to every other school I attended. However, I did look forward to being there every day for a few weeks in December, when we started learning Christmas carols.

I loved the music. I didn’t understand the words. Having been raised in a Jewish family, and being only 4 years old, I had no background in the Christmas story, no reference points. But I had never heard these songs before and I thought they were beautiful. I still do—even now, when I understand the words.

The next year, I started kindergarten at Coventry School. We sang Christmas carols there, too. And did so every year of elementary school. Christmas carols and Christmas songs. I never cared what they meant; I just liked hearing them and singing them. Well, I liked the carols, not the songs so much. I thought the songs were kind of contrived and silly and musically simplistic (though I might not have described them that way in the third grade—but I felt it).

At Roosevelt Junior High, I played sax in the school band, so I didn’t get to sing carols. But the kids in the school choir did. (When my kids went to Roxboro Elementary and Middle schools, they still sang Christmas songs there, but the schools had added a couple of Hanukkah songs, too, to make it all equal. So they’d sing a bunch of songs about how Jesus was born to save the world, and then, for balance, a song about potato pancakes and one about a toy, the dreidel.)

It got really good at Heights High, when I joined the Choir and we sang not only beautiful versions of Christmas carols, but also the amazing religious choral works by all of the great composers. I found it all quite gratifying to be a part of and the music very moving. And I still do.

And if I was annoyed by commercial Christmas songs in the third grade, I’m exasperated now—not because of their content, but because they’re just full of such bad music. And I hate, like most of us do, that these insipid songs start playing, on radio stations and in stores, constantly, relentlessly, six, and in some cases eight, weeks before Christmas. And we really don’t need 900 versions of “Santa Claus Is Coming to Town” or “Jingle Bells” or “Rudolph the Red-Nosed Reindeer,” by everyone who ever sang a pop song. But, of course, with so many radio stations and stores playing nothing but Christmas music around the clock for two months, they’re desperate for material to fill up the time. It’s a circular problem, which I could easily remedy, if given the opportunity. And speaking of requiring too much Christmas music, if you’ve ever wondered why songs that have nothing to do with Christmas—like “Let It Snow,” Winter Wonderland,” and even “Baby, It’s Cold Outside” (both the politically incorrect and the new politically corrected versions)—are considered “Christmas” music, that’s why: They just have to fill the time.

My wife and I go to a Christmas Eve service every year, mainly for the music (and also, a little, because everyone is nice that night). We spent a few years trying to find the church with the best music. It’s a slow trial process because you only get one chance a year. We enjoyed the music in many Cleveland Heights churches, but we finally settled on Church of the Covenant, in University Circle, on Euclid Avenue, a few steps from the end (or is it the beginning?) of Mayfield Road. The church is in Cleveland, but for this publication’s purposes, I’m proclaiming it Cleveland Heights—because it’s so close to Cleveland Heights, and because so many of its members are Heights residents. In fact, if I had a map—the kind we used to have, printed on paper—I would take it to the President, so he could use his black marker to officially make Church of the Covenant part of Cleveland Heights.

That church’s Christmas Eve service includes a good choir, organ, trumpet, tympani and sometimes other instruments, and usually some songs by their bell ringers. They do traditional carols and lesser-known older and newer music. It’s all majestic and heart-warming.

I haven’t been a practicing Jew for decades, though almost everyone in my extended family is, and I have been steeped in that culture. But I have loved Christmas carols since I was 4 (and that’s a long time). It’s not the religion, it’s the music. And the memories.