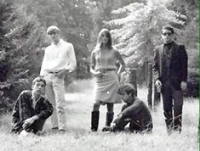 One of my three concurrent high school bands. This one was called the Streets. Within a few years, two or three of us would be living on the streets. I’m on the right. The person whose name isn’t John is one of these other guys.

I grew up in houses on Belmar Road, near Mayfield. It seems like one house, but there were two. I spent my first 15 years in half of a two-family up-and-down duplex; the first house after the apartment building on Mayfield, on the east side of the street. Then, in the summer between my 9th- and 10th-grade years, 1964, we moved next door, to a house with the exact same layout. So it seems like I lived in one house. Until I picture the main difference.

In the second house—where I stayed until I was 18—we lived downstairs. That was a big change. No more 20-stair climb (four steps from the ground to the front porch, then 16 more steps to our half of the house). What I also discovered, that first summer in the new place, was that the land it was built on sloped toward the street. So while there were a few steps up to the front porch, the windows in the back bedroom, where I lived, were only four to five feet off the ground.

That meant that I could easily and silently jump out one of the windows next to my bed, after my parents fell asleep, and walk all over Cleveland Heights. I did that just about every weeknight. Some of those nights, I walked to a friend’s house on Derbyshire, near Lamberton. He was usually awake late at night, so I’d knock on his first-floor bedroom window and he’d come outside and we’d smoke cigarettes and talk for most of the night. Then I’d go home before my father got up—he rose early for work—and I’d pretend to be asleep on the front porch glider. (Things were different then. We didn’t lock any doors, either, which sounds crazy now. My parents reluctantly started locking their doors in about 1983, at my insistence.)

But more often, I’d go visit a girl I knew, who lived on Fairfax, not far from the elementary school. That was a fairly long walk. But it was well worth the time and effort. She lived in a huge house and her bedroom was in the back, over the attached garage, and far from her parents’ room. She told me to throw pebbles at her window. I would toss two or three before she’d open the window and whisper that she’d be right down.

We’d usually sit on the ground with our backs against the garage door—something I would find unbearably uncomfortable now, but it seemed like heaven then—and we’d talk, in between other activities.

I actually enjoyed the long walks home from her house. I would compose poems (I did that back then) and songs. Two or three of those songs actually made it onto an album I recorded for Sire Records five years later.

When that summer ended, I started high school, at Heights High. The girl was there, too, but she graduated with the January class that year and I never saw her or heard from her again. Of course, that was 40 years before the advent of Facebook, so people could really get lost then, if they wanted to.

After the school year started, I didn’t need to sneak out to visit my friend on Derbyshire, because I stayed over one night and stayed for the next few months. When we moved into that second house, my older brother had just graduated from Heights and in early September he left for college. So he lived there for only a few weeks, and his bed was unused after he left, until my friend, who came from what they called a “troubled home,” took up residence. He didn’t officially move in, but every night it was, “John is staying over again.” (John is not his real name.) He would eat dinner with us and then we’d go to the back room and play our guitars and write songs.

By the next summer we had started a band that played a bunch of weird gigs over the next couple of years. I’m still in contact with two of its members. “John,” I hear, is a homeless guy on the streets of Phoenix. After high school, when I sort of got kicked out of the house, I was homeless for a while in Cleveland and, off and on, in New York City. At least “John” had the sense to go someplace warm.

Back in high school, the only thing I ever wanted to do was get out of school and get out of that house. When we moved next door and people would ask my father why, he’d often joke, “I guess it’s just the gypsy in us.” He really didn’t know how true that was, at least for me, for a while.