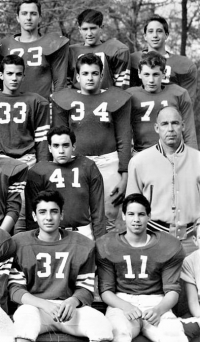 I'm standing right next to Coach Jackson—No. 41. For some reason, my shoulder pads were much smaller than everyone else's. Maybe that's why playing on the line was so painful.

Most of the way through Coventry Elementary School, I was a chubby kid who hated sports (except for baseball, though I wasn’t very good at it). And I always hated running—except to first base, after hitting the ball in a baseball game, though, fortunately, I guess, that situation was pretty rare.

But then, around the fifth grade, I started getting taller. By the sixth grade, I was among the tallest kids in the school. I didn’t realize that I was never going to grow any taller. But it was nice for a few years. Then, starting in, maybe, the ninth grade, I got shorter every year. (Not literally, of course. That’s happening now.) Then, when I got to Heights High, I had to try to remember which kids I might have bullied during my tall years.

But, going back to sixth grade and my sudden tallness, and its resultant thinness, another unexpected result was speediness. I suddenly became a really fast runner.

In the summer, between seventh and eighth grades, my second summer playing for Cumberland Park’s softball team and hanging out at Cumberland every day—mostly playing tether ball, which I still think should be an Olympic sport—this man, Mr. Tupta, Roosevelt Junior High’s guidance counselor, came around and started timing kids in the 50-yard dash, in search of participants for the upcoming Junior Olympics. I did well, and he wanted me to run in that event, but I declined (I don’t remember why). But he strongly suggested that I try out for the Roosevelt football team in the fall, because I was fast and big. He thought I could be a ball carrier.

Except that when I tried out, and made the team, we all figured out that I couldn’t see much without my glasses—and that included the ball—so Coach Jackson put me on the line. Which was awful. But I lasted the full season. Because I didn’t play very much. The next year I played a lot. Enough that halfway through the season I quit. I also ran track at Roosevelt, which was much nicer than football. Except for all that running we had to do in training. So that was the end of my athletic career. All I really wanted to do was music, anyway.

Though at Heights High we did have to go to gym class. The first semester, my gym teacher was the school’s football coach. The class was fun, in a way, mainly because he said things like, “Okay, boys, run on the count of three. One, two, three, ready, GO.” Which meant that every one of us false-started. And, after dividing the class into four football teams: “Okay, boys, I want teams one and two over there, and teams two and three over there.” So, team two ran back and forth, not knowing where to go, and team four just stood there watching. My friend, who helped out in the school’s athletic offices, described this coach as the kind of guy who sticks his head into a room that has one person in it and says, “Anybody want any coffee?”

But my most memorable gym class was the day our teacher, Coach Cappelletti, had to attend a meeting and put all four of our period’s gym classes—100 guys—together in the gym to play battle ball. The substitute gym teacher laid out the rules. He said, “Okay, boys, when you get hit, be honest and raise your hand and go sit on the side.”

My friend Bellamy and I both—as soon as one ball was thrown—raised our hands and sat down on the side. After watching for a minute, I said to him, “Look, let’s just go get dressed and take off. There’s a hundred guys here. And chaos. No one will know.” So, that’s what we did. While we were walking through the hall, on our way to freedom, I joked that we’d probably run into Cappalletti, who would say, “Budin? Bellamy” Where you guys headed?” We laughed, and immediately ran into Cappalletti, who said, “Budin? Bellamy? Where you guys headed?”

We received some kind of suspension. About 30 years later, when I was doing some kind of volunteering at Heights High, I ran into Cappalletti, who, by then, had become one of the state’s best high school basketball coaches. (He died a few months ago.) Cappalletti and I talked for a while and I told him the battle ball story, which I thought he might find amusing. He began to apologize, and I stopped him and said, “No. You were right. You were doing your job.”

He thanked me. I thought about it for a second and I said, “No. Thank you.”