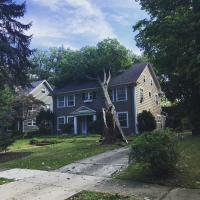 City crews and First Energy respondents are making headway clearing debris, fixing downed utility polls and restoring power after a major storm and microburst damaged neighborhoods in Cleveland Heights and nearby suburbs on Friday, Sept. 13. The microburst—a rapidly descending wind and rain shaft caused by storm convection—was the second to hit the community in the last three years.

The vast majority of damage occurred in the neighborhoods south of Cedar and west of Lee roads, fanning out from the Fairmount Boulevard, Coventry Road and Scarborough Road intersection.

As a result, the Heights Community Congress (HCC) Home & Garden Tour, scheduled for Sept. 14, was canceled. The homes and yards featured on this year's tour were all located in the historic Coventry and Fairmount neighborhoods. Money raised from the annual event supports HCC’s mission to promote and safeguard fair housing practices in Cleveland Heights.

In a Sept. 16 press release on their website, HCC staff thanked ticket purchasers for their understanding, noting that many had chosen to donate the cost of their tickets to the nonprofit. For more information, visit www.heightscongress.org.

The Heights Music Hop—another Cleveland Heights staple event, scheduled this year for Sept. 12, 13 and 14—was able to proceed both the night of the storm and the following evening. At approximately 8:45 p.m., the south side of the Cedar Fairmount Business District lost power, but the music continued—in the dark—as the three bands scheduled to play in businesses there adjusted to the situation and went acoustic.

“We knew lots of folks didn’t have power Saturday morning,” said Deanna Bremer Fisher, executive director of FutureHeights, the organization that presents Heights Music Hop. “We made the call to go forward with the event for Saturday once we determined that 14 of our 19 Cedar Lee venues had power. Our thought was that people would want to come together—where there was music and light.”

“We were hoping that power would come on for the other five but that didn’t happen,” she continued. “The Rib Cage was able to move forward with its pig roast and outdoor music, Dewey’s hosted the music on its patio and CLE Urban Winery hosted its bands via candlelight. New Heights Grill and Lopez were not able to open and host music as planned.”

According to the latest update from the city of Cleveland Heights, power should be restored to all residents by late-afternoon, Sept. 17. Multiple city crews are still at work making roadways safe from debris and damaged utility polls. All residents are encouraged to travel cautiously. For progress updates, visit the city’s website at: https://www.clevelandheights.com/AlertCenter.aspx?AID=Storm-Update-September-16-2019-1