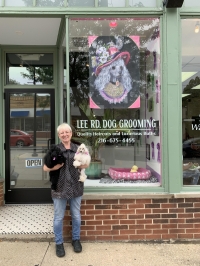 Linda McFadden, who loves dogs and Ohio, has brought her advanced grooming skills to Cleveland Heights, where she opened Lee Road Dog Grooming, at 2246 Lee Road, in September 2018.

Born in Glasgow, McFadden grew up among show dogs in Jersey, Channel Islands, where her mother was a dog show judge. McFadden came to the U.S. to show dogs. First stop, Medina. Then she had a dog grooming shop in California’s Bay Area for more than 20 years. But she missed Ohio, and saw opportunity in Cleveland Heights.

McFadden knows best practices for each breed. “I’ve seen the best examples of different breeds, and try to give a pet version [of the style], maybe a bit modified so it’s easier to look after,” she said. She does all the grooming herself, serving only about four dogs a day, and prides herself in creating a relaxing experience. “I love it when people say ‘he doesn’t mind coming in here at all,’” she commented.

She has a new bathing tub and uses Artero, a gentle and hydrating grooming product line from Spain.

According to McFadden, a trip to the groomer “is not a big deal” if dogs are exposed when they’re young. ”Sometimes people say, ‘He doesn’t like it, that’s why I don’t bring him in all the time.’ I say it’s the opposite. If you bring him in often, he’s used to it, it’s no big deal, it’s a day at the spa. I love working with puppies, and try to give them a lot of attention. It’s good to have them come in again sooner than later to reinforce that good experience, so that they’ll remember for the rest of their lives,” said McFadden.

“People tend to wash their dogs at home and then they get tangled and matted. It’s best to have a routine, just like men schedule their barber,” McFadden explained. “Generally the longer the hair the more often they should come. If a dog gets shaved down they look horrible, and if owners leave it until it’s long again, the coat gets tangled, and you have to shave it down again.

“If people can bring them in once a month they can have practically any haircut. If you want to leave it two months you might want it cut a little shorter. Poodles and labradoodles are quite high maintenance. If you want to wait three months that’s fine, too, but they need to be cut quite short to avoid matting.”

For those who want to bathe dogs at home, McFadden advises, “Be sure to brush them before the bath as well as after to avoid matting.”

Noting that show dogs love to be groomed, McFadden commented, “They make good house dogs, too. People love getting puppies. I tell them, ‘Puppies are great, but you might also want to consider a retired show dog. The breeders can’t keep them all, and are very happy to have them go to have a nice life with somebody.’ They’re very well trained.”

Dropping off a dog for grooming can be like the first day at preschool, but McFadden said pet parents should be “matter-of-fact, taking a quick and calm exit. All will be well.”

She specializes in smaller dogs, and is usually booked a week in advance. To make an appointment, call 216-675-4455 (leave a message if she can’t answer).

If you drop in, you might meet YaYa and Stormy, McFadden's toy poodles. YaYa was the 2018 Westminster Kennel Club “Best of Opposite Sex” winner (meaning she was named the best dog in her breed that was the opposite sex of the Best of Breed winner).

Clients can park in front of the shop, or take a stroll on Lee Road.

“I love that lots of people can walk here,” McFadden said. That way the dogs can strut their stuff on the way home.

Libba Jackson-D’Ambrosi earned a bachelor of journalism from University of Missouri. Her communications career in radio, television, education, philanthropy, water and wonder runs through seven states.