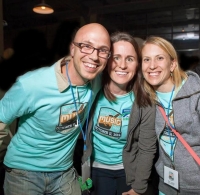 The public is invited to attend a band lineup announcement event for the seventh annual Heights Music Hop 7–9 p.m. on Aug. 16 at the BottleHouse Brewery and Meadery, 2050 Lee Road. At the event, organizers will announce the acts for this year’s free live-music festival.

The three-day weekend of more than 60 musical performances will take place Sept. 12-14 in more than 28 venues across three business districts in Cleveland Heights. The event offers a variety of musical genres, such as classical, rock, rap, country, reggae, bluegrass and American roots.

Heights Music Hop began in 2013. Jeff Coryell, a former FutureHeights board member, believed that Cleveland Heights had the artists, musicians, resources, and public interest to warrant organizing a large-scale music festival. Other individuals, business owners, and partner organizations quickly joined the mix–including fellow board member Greg Bonanno. Although he has been stationed more than 7,000 miles away for the last several years, Bonanno is still an ardent supporter.

“A shared vision existed,” said Bonanno, “what it was to become and how we were going to arrive at that point took the better part of the next eight months. The plan worked–we delivered an event that proved the Heights had an appetite for a large-scale music festival.”

Bonanno came to Cleveland Heights in 2007 to study music. He later took a job that involved programming daily performing arts events. “Music and the arts are extremely important to me,” he said. “I believe the arts are as necessary as the air we breathe and the food we eat. It is imperative we enrich ourselves with the diverse 'flavors' of art–and it is equally important that we grow and cultivate the future 'food' by supporting local artists.”

Bonanno said he spent countless hours working on the Hop and enjoyed every minute of it. “I worked with people who shared a passion for building a conspicuous event meant to draw attention to the community and bring members of the community together,” he said, adding, “the people are what made my time living in the Heights so memorable. They zealously advocated, by words and actions, that the Heights was a place where everyone had the opportunity to own a role in improving the community as a place to live, work and play.”

Bonanno led the Heights Music Hop Committee from 2014 until May 2015 when he took a job overseas. “After delivering a successful proof of concept, we did it again. In the second year we expanded the event to include more venues, a larger roster of artists, and tested the idea of multiple days in different business districts.”

He emphasized that the festival would not have been able to develop, grow, and sustain itself without the support of many contributors, including city officials and police, local merchants, musicians, volunteers, sponsors, committee members, partner organizations, the special improvement districts, and community members eager to participate in the festival.

“One major contributor to the early success of the Hop was Jim Henke,” said Bonanno. “From writing stories about the festival, to helping book the artists, to fundraising, and always injecting committee meetings with his sense of humor. I just learned of his passing and want to remember how he helped grow and shape this event to what it is today. May he rest in peace rocking-out to the Music Hop of the heavens.”

This year’s Hop kicks off on Thursday, Sept. 12, in Coventry Village; continues on Friday, Sept. 13, in Cedar Fairmount; and culminates on Saturday, Sept. 14, in Cedar Lee.

Heights Music Hop is presented by FutureHeights, in partnership with the city of Cleveland Heights. It is supported in part by the residents of Cuyahoga County through a Cuyahoga Arts & Culture grant. The event is also made possible in part by state tax dollars allocated by the Ohio Legislature to the Ohio Arts Council (OAC). The OAC is a state agency that funds and supports quality arts experiences to strengthen Ohio communities culturally, educationally and economically.