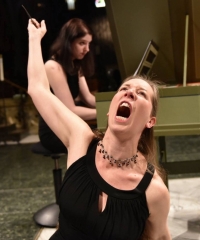 Thoughtfully crafted programs inspired by the current social climate are once again at the heart of Burning River Baroque’s upcoming season, which will shed light on unconventional 17th-century women and issues surrounding mental health. The group, known for both  socially motivated programming and dynamic interpretations, will open its eighth season with a performance of A Mad, Burning Desire on Aug. 22 in Cleveland Heights.

The program highlights the extraordinary accomplishments of the first English actresses who gained the legal right to take the public stage in the early 1660s. Many of them capitalized on early modern society’s fascination with mental illness and catapulted themselves to fame by portraying characters who descended violently into lovesick madness on the Restoration stage. English philosophers and medical experts alike began to think of psychological maladies as medical conditions requiring treatment by doctors rather than as spiritual deficiencies to be handled by religious authorities over the course of the 17th century.

At the visual epicenter of London’s cultural fascination with madness was Bedlam, a facility that was transformed from a dilapidated hospital into a sprawling mental institution in 1676. Wealthy visitors regularly came to Bedlam to pay to be entertained by those society deemed insane. This cultural phenomenon of making a spectacle of the mentally ill converged with spectacular mad scenes that were brought to life by the first English actresses in the Restoration theater. A Mad, Burning Desire features the mad songs by Henry Purcell, John Eccles, Godfrey Finger and John Blow that captivated London’s theater-going audiences in the 1690s.

Burning River Baroque will take audiences far beyond the music in these performances. Engaging dialogues about the ways the perception of mental health issues in the early modern period is directly related to the stigma surrounding mental health in contemporary times will challenge audience members to consider how we might address the mental health crises many are facing today.

Praised as a group that “left an indelible imprint on my psyche” (Boston Musical Intelligencer), Burning River Baroque offers vibrant musical performances that inspire engaging dialogues and meaningful social change. You can experience A Mad, Burning Desire on Aug. 22 at 7:30 p.m., at a house concert in Cleveland Heights. A suggested donation is $20. RSVP at burning-river-baroque.org for the address and to reserve your spot. Other performances of A Mad, Burning Desire will take place in Cleveland Heights in October. You can find more information at www.burning-river-baroque.org.