Where did we go? 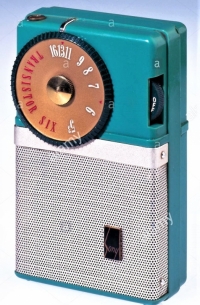 It's not much bigger than today's cell phones, but all it did was broadcast AM radio shows—which was all we thought we needed then.

I’ve lived in my current house for 33 years. Our street has a block party every summer. The first time I attended one, I asked several people how long they had lived on the street. A few of them said they’d been here for 30-some years, and I thought, “What a loser.” Now younger new neighbors come up to me at the block party and ask how long I’ve lived here, and I say, “Oh . . . a while. . . .”

After I’d lived in this house for about 10 years, I ran into an old friend from junior high and high school at a Little League game at Forest Hill Park, where our kids were playing on opposing teams. I hadn’t seen him since high school. I asked where he lived and it turned out he’d been living one block east of me. For 10 years.

Two years ago, I attended my high school reunion at Nighttown and ran into another old friend from junior high and high school, whom I hadn’t seen in about 40 years. I asked him where he lived and it turned out he’d been living one block west of me. For 10 years.

And I’ve run into many other old friends who also live in the area, but whom I rarely see.

For one thing, we—most of us—drive almost everywhere. When I was growing up, my parents, and everyone else, walked everywhere they could. We lived near Coventry, so they could walk to almost any kind of business they needed to—butcher shops, grocery stores, banks, dry cleaners, an appliance repair shop, bakeries, a hardware store, barber shops and beauty parlors, drug stores, restaurants.

And I could walk to get whatever I needed, too. The three drug stores on Coventry sold toys, baseball cards, candy, comic books, even the current hit singles. And I walked up Coventry to Coventry School for seven years. Even in high school, I often walked home from Heights High via Washington Boulevard and Coventry Road, stopping at one of the three bakeries on the way for a giant pecan roll (which didn’t ruin my appetite).

Driving-versus-walking is one reason. Another big one, I think, is that we’ve all built decks onto the backs of our houses. When I was a kid, everyone hung out on their front porches or front steps or front lawns. My family did all of those. We lived upstairs in a duplex owned by my father’s aunt, who lived downstairs.

I remember sitting on her porch, when I was young, on hot, humid July days. We didn’t converse much—she was so much older, and she spoke mostly Yiddish—but any time a breeze blew, she’d say, “Oy. It’s a mechaye [a pleasure; a joy].” I still think that, when I’m outside on those hot, humid July days and nights, and a breeze blows—“It’s a mechaye.” But I don’t say it out loud. Usually.

My father used to stand on the front lawn most evenings, watering the grass. That lawn was the size of my current living room and I knew it didn’t need that much water. But I figured out later that he was standing there to talk to neighbors who passed by, or who just walked over to talk. Now we put sprinklers on our front lawns. And we go to the back, to hang out on the deck.

When he wasn’t watering, my father would sit on the front steps on summer evenings with a portable radio, listening to Cleveland Indians games. I can still hear the sound of the AM radio’s tinny, little speakers: “Hello, spawts fans. This is Jimmy Dudley faw Kahn’s all-meat weenahs.” Sometimes I’d hear him say, “I see my old friend Danny Budin sitting behind the Indians’ dugout.”

Danny was my father’s cousin, who owned Budin’s Delicatessen, which was on Coventry in the ‘40s, and then in Shaker Heights. Danny used to play golf with Indians players and take one golf bag full of clubs and another one full of corned beef sandwiches. The restaurant was started by Danny’s mother, my father’s aunt—the one who lived downstairs and who still made the secret sauce for their chocolate phosphates in our basement.

During those summer days, I would sit on those same stairs with that same radio, listening to the pop hits of the day on WERE, WJW, KYW and WHK—with the Mad Daddy, Bill Randle, Tommy Edwards, Specs Howard, Carl Reese, Joe Finan, Johnny Holliday—and reading Superman comic books.

I still sit outside on many summer nights. But now it’s on the back deck, working on my laptop. After driving to a store three streets away.