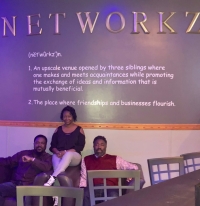 The Loretz siblings, Bryan (left), Damon (right) and Lillian Williams-Loretz pose under the sign explaining the vision of Networkz Restaurant & Lounge, which they opened in October. All three are Heights High alums.

The three Loretz sibilings, all Heights High alums, wanted to bring a version of the TV-bar Cheers to their hometown. Bryan Loretz (class of ’84) said they didn't want to open another watering hole or a sports bar. "We wanted to create a place like 'Cheers,' where everyone knows your name. We wanted a place where patrons could come, feel safe, dance, meet friends and make new ones, have good food and drinks in an upscale atmosphere." His brother, Damon (class of ‘93), agreed, "If you close your eyes, we wanted you to think you were in Atlanta, New York City, or Chicago. That's the vibe we wanted to create."

When the Loretz siblings graduated from Heights High, they followed different career paths. Lillian became a podiatrist and moved to Savannah, Ga. Bryan went into law enforcement and eventually became coordinator of safety and security for the Cleveland Heights-University Heights school district. Damon went into education, eventually becoming an administrator in the South Euclid-Lyndhurst school district. But, when they got together at family functions, they shared a common dream—to open a restaurant.

Lillian was the first to make the leap. She opened a restaurant in Savannah and ran it successfully for seven years, until the building [it was in] was sold. After Lillian's restaurant closed, the three siblings decided the time was ripe to collectively open a restaurant in Cleveland Heights. They scouted various buildings but nothing seemed like the right fit. Finally, in early 2018, they found a site in Severance Circle that had once been a restaurant/bar.

They didn't want to just reopen the restaurant with a new name. They wanted to remake it, rebrand it, make it different from anything in the area. They wanted to "create an upscale venue where one makes and meets acquaintances while promoting the exchange of ideas and information that is mutually beneficial; a place where friendships and businesses flourish." The description was so important to them, they put the words up on the inside wall of the restaurant, right under the new name, Networkz Restaurant & Lounge.

It took five months to transform the space. Lillian brought a wealth of expertise, sharing everything she had learned from her years as a restaurant owner. She took Damon around Savannah to see other restaurants, and her husband, Arthur Williams, came up north to help with the start-up process. A dip in the floor was leveled to create a good-sized dance floor. The walls were painted in sophisticated greys and burgundy. The bar area was fitted with special lighting and several TVs. A live-music stage was set up next to the DJ booth. They added booths and tables.

One unique feature is the realistic-looking indoor tree with colored lights. Damon saw one in another restaurant and pushed to add one to Networkz. It’s now a backdrop for patrons’ selfies and group pictures.

Networkz has live music and a "pick your own sound" jukebox. The restaurant has a full bar and extensive menu. Honey wings are the big seller. The owners have hosted everything from line dancing to ballroom dancing, and catered large events. Bryan's wife, Feleisha (class of '86), is the event coordinator. This summer the Loretz family hopes to expand to outside seating. "Who knows, we might even host a tailgate party in the fall," Bryan said.

Check out Networkz's Facebook page for hours and special events.

Lita Gonzalez has lived in Cleveland Heights since 1995. Now retired, she is an avid volunteer.