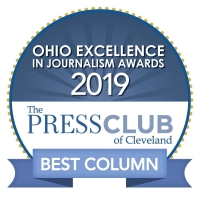 For the second year in a row, the Heights Observer won second place in Ohio’s largest journalism competition for the title of Ohio’s best non-daily community newspaper.

David Budin’s “Songs and Stories” column, which has appeared in almost every Heights Observer issue over the past decade, was honored with second place as well in the category of best column.

The awards were announced June 7 at the 2019 All-Ohio Excellence in Journalism Awards, presented at the House of Blues by The Press Club of Cleveland.

The 41-year-old awards program supports and recognizes quality journalism across Ohio. It includes all media—from large daily newspapers and community weeklies to magazines, trade journals, websites, TV and radio. More than 800 entries were submitted across all categories of the competition, and were judged by journalists from other press clubs outside the state.

In recognizing the Heights Observer, the judges commented, “Not a conventional newspaper, but a well-crafted example of citizen volunteers demonstrating why local news coverage is critical for communities.” The award was based on a review of three complete 2018 issues of the paper.

The top award in the category was taken by the Cleveland Jewish News for the third year running.

Budin’s award was likewise based on submission of three sample columns, about which the judges commented: “Witty, real and sincere insights given into the life of a true independent. So enjoyable and inspiring.”

The winner of best column was Jim Ingraham of the Elyria Chronicle-Telegram, which also was named the Ohio’s best daily newspaper under 75,000 circulation.

Among the other winners were Akron Beacon Journal, best large daily newspaper; CAN Journal, best magazine; and WJW-Fox 8, best television newscast. A complete list of honorees was scheduled to be published on The Press Club of Cleveland's website, www.pressclubcleveland.com.

"We’re thrilled for David and everyone who contributes to the Observer,” said Deanna Bremer Fisher, publisher of the Heights Observer and executive director of FutureHeights. “It says something about our community that a nonprofit, volunteer-based publication can compare so well to traditional media across the state. We’re grateful to our team of regulars who produce the paper each month, the volunteers who write articles and distribute the paper, and, of course, to the advertisers who sustain it.”