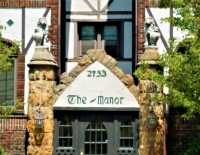 The Manor, the Tudor building with gargoyles guarding the entrance, where I lived in the unit the custodian believed was called the "deficiency."

I once opened a Long Road show at Nighttown by saying, “Thank you. It’s great to be back in Cleveland Heights. Well . . . I was in South Euclid this afternoon . . .”

When I was born, my family lived on Belmar, two streets east of Coventry, in the first house after the apartment building on the corner of Mayfield. When I was 15, we moved to the house next door. When people asked my father why, he said, “It’s just the gypsy in us.”

When I moved out, at 18, after spending my life hanging out on Coventry, I moved to an apartment on Coventry, right above Heights Hardware. Tommy’s hadn’t opened yet, so I had to eat at Irv’s. I learned a lot sitting in Irv’s for hours every day. I’m not going to tell you the kinds of things I learned there, because I love the Heights Observer and I don’t want to see it get shut down.

I was a young folksinger and songwriter then, and I played at Farragher’s, a folk club on Taylor Road, near Cain Park, and at La Cave in University Circle. I became friendly with the other local folkies, and a bunch of us moved into a house on Kenilworth, where a young, rich guy had built a nice recording studio in the basement and let us live in the house for free.

From that ideal situation I moved to New York City for a few years. I did play with a lot of illustrious rock legends, and I was in a band that later became world-famous, and I did get signed by a national record label, but in a pretty short time I became what might be described as an overnight failure. So I moved back to Cleveland. Heights.

I lived in a house on upper Hampshire, a nice place—except for the mushrooms growing out of the shag rug that surrounded the toilet. I didn’t mind that as much as I did the (former) friends of mine who had become junkies and stole some valuable stuff from me.

That was when I began my year in the old University Circle mansion. But shortly after a drunk housemate decided to get rid of our Christmas tree by sticking it into the burning fireplace—on Valentine’s Day—I moved out, rather than help repaint the entire, very large living room.

I lived in a series of houses and apartments, almost all in the Coventry area, including five places on Euclid Heights Boulevard alone. My favorite was in The Manor, the Tudor building with the gargoyles over the entrance. I had the efficiency—which the custodian, when he was showing it to me, kept calling the “deficiency,” but he wasn’t joking. He really thought that was the correct word.

I loved that place. It was one room, plus a tiny kitchen and a bathroom. But it was all I needed. After playing or practicing with my band, or on nights when I didn’t do either, I would hang out at Chester’s on Coventry. Sometimes I would spend time there during the day, too. That continued when I moved to a third-floor apartment in a house I hated, at Cedar and Coventry. I was sitting in Chester’s one afternoon with a few other musicians when one woman expressed her wish that we could have a clubhouse, rather than having to meet in a bar, drinking.

That’s when I got the idea to rent a place that cost $160 a month (pretty cheap, even for 1975) and pay half of it myself, and have eight other people pay $10 each, per month, to use it as a hangout. We did that for a few years, first in a basement apartment on Euclid Heights Boulevard, and then in a house on Derbyshire, near Lee. We called it Chez Beaux Eau, which is grammatically incorrect French, but it is pronounced “Bozo.”

And then I got married and we bought a house on Berkshire, near Cottage Grove, followed by our current house on Delaware Drive, only 600 steps from the front door of Nighttown. When Long Road plays at Nighttown, my house sometimes functions as the “green room.”

I can’t name all of my dwelling places here, but there have been 30. Enough that my kids finally begged me to stop pointing at places, every time we drove anywhere, and saying, “I lived there."