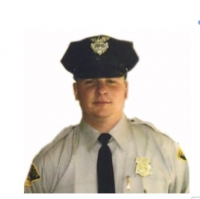 Nighttown will host the 2019 Officer Jason West Memorial Scholarship Mega Raffle fundraiser on Sunday, May 5, 5–8 p.m. Raffle tickets are $2 and can be purchased from any committee member, at Quintana's Barber & Dream Spa, CLE Urban Winery, Shawn Paul Salon and Nighttown, or at the event.

This year will mark the 12th anniversary since a group of Cleveland Heights residents and business owners first came together to start the scholarship, which honors the memory of Officer West, a member of the Cleveland Heights Police Department, who lost his life in 2007 while responding to a disturbance call.

"Officer Jason West was a hero, not because of the way he died, but because of the way he chose to live his life—as a devoted son and brother, loyal friend, a mentor and role model to young adults in the community, and as a dedicated police officer," said Liz Radivoyevitch, co-chair of the scholarship committee.

West had always wanted to be a police officer. He felt it was important to serve as a role model to young adults. “Because of the scholarship, Jason's memory and beliefs continue to touch the lives of young men and women hoping to continue on a path to a career in law enforcement," said Radivoyevitch.

The first scholarship was awarded in 2008 to a graduating senior from the Criminal Justice Program at Cleveland Heights High School. Since then, the scholarship committee has given out a total of 17 scholarships to graduating seniors from the Criminal Justice Program at Heights High, and paid the full tuition for two award recipients to attend the Cleveland Heights Police Academy.

Lita Gonzalez has lived in Cleveland Heights since 1995. She is recently retired, and an avid volunteer.