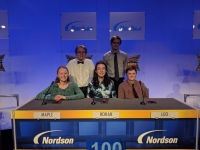 Cleveland Heights High School junior Rohan Bruce has “always really liked reading," and commented, "I retain a lot of (seemingly) useless information"—a skill she puts to use as captain of the high school’s Academic Challenge team.

Academic Challenge is a quiz show for high school students, testing their knowledge of topics ranging from literature and history to physics and geography. A fledgling club was started at the middle school level a few years ago, which is where sophomores Buescher and Kenealy got their start. Buescher hoped to continue competing in high school and proposed a club to administrators, who approved the idea as long as she could find an advisor. Social studies teacher Karl Neitzel stepped up to the challenge, so to speak.

“Each student has their own areas of expertise,” said Neitzel. “One might know everything about history while another reads all the time.” The quiz structure includes team rounds, where students have time to confer with one another, and lightning rounds, where they have to buzz in as quickly as possible.

All three students said they were extremely nervous about competing on television. In fact, Bruce said she was so scared at the start that she thought she might be sick. But, according to Buescher, “The WEWS staff and our competitors were all super friendly. We had an intense and competitive game, that was also incredibly fun and rewarding.”

Kenealy called the experience “amazing," and said, "Maple, Rohan and I were proud to represent Heights High on TV.”

The team won first place in an intense back-and-forth final minute that started out with Heights 20 points ahead and saw them tied with St. Ignatius 30 seconds later. With just ten seconds remaining, St. Ignatius was up by 10 points, until Rohan correctly identified Mozart’s opera “The Magic Flute” to pull ahead as the final seconds wound down.

Krissy Dietrich Gallagher, a longtime resident of Cleveland Heights, is a former district teacher, and a freelance journalist under contract with the CH-UH City School District.