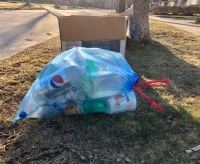 Blue bags and boxes may disappear from tree lawns in Cleveland Heights if a task force recommends an automated collection system for the city.

Blue bags or blue bins? Public or private trash collection? These are just two of the major questions the newly formed Refuse and Recycling Task Force has to answer for Cleveland Heights over the next six months.

At the first task force meeting on April 18, Director of Public Works Colette Clinkscale said the city’s aging system is at a tipping point. “Equipment is at a point where we need to make an investment, and we don’t want to make the wrong investment,” she said. Clinkscale is one of three city staffers who will act as non-voting consultants to the volunteer committee.

The 10-member task force (eight attended the initial meeting) is a diverse group that includes John Blackwell, professor emeritus from Case Western Reserve University with expertise in plastics; Cathi Lehn, coordinator at Cleveland’s Office of Sustainability; Jordan Davis, a music administrator with a commitment to recycling; Hope Wright, who described herself as a regular citizen with a background in communications; and realtor Susan Clement, who expressed concerns about trash issues and their effect on the community's image. Carin Miller talked about her life-long commitment to environmentalism, which includes graduating from the county's Master Recycler program. She said she picks up trash while she walks her dog. Kelly Menaker said she does the same on walks with her children, teaching them environmentalism while filling trash bags. The group chose Constance Johnson, an administrator at Central Bible Baptist Church, as its chair, and Miller as vice chair. The two other task force members are Susan Efroymson and Davida Russell.

Joe Kickel, the city’s manager of capital projects, is another staff consultant to the task force. He outlined the city’s current collection method: Single-operator trucks pick up bags of trash and blue bags of recyclables from 15,000 residential units. The city uses single-stream recycling, meaning items are unsorted. Recyclables are compacted and sent to a county facility. The city has its own transfer station where trash from garbage trucks is moved into tractor trailers and hauled to the dump in Shiloh, Ohio.

The Updated Cuyahoga County Waste Management Plan, which the city unanimously adopted in March, pushes cities toward an automated system using specialized carts (64- and 96-gallon plastic cans with wheels). Bags can be thrown into the trash cart, but recycling goes loose into a separate blue cart. Residents wheel trash and recycling carts into the street along the curb, and a specialized truck with a side-lift, operated by the driver, grabs the cart and dumps the contents into the truck.

The county plan says, “One of the (Waste) District’s goals has been to improve residential curbside recycling by increasing the number of communities using automated collection with recycling carts. . . . communities that switched to recycling carts from blue bags . . . achieved a 77-percent increase in recycling collection.” It says automation “increases collections speed and efficiency and reduces workman’s compensation claims.” According to the county, recycling centers don't like the blue bags because they must be cut open, and sometimes bags clog processing equipment.

In an e-mail and phone interview, Vice Mayor Melissa Yasinow, who chairs the Safety and Municipal Service Committee, said the anticipated cost to implement automation, more than $4 million, is higher than what the city currently spends per year on refuse and recycling, about $3.4 million. The task force hopes to schedule a meeting with an official from a Cuyahoga County city that made the transition to automation. The county plan says 40 area communities currently use automation, about half since 2012.

Going with a private trash hauler might eliminate capital costs but create other problems. Yasinow said the city needs to consider its transfer station. “Our transfer station is grandfathered in under federal regulations, and it helps us keep transportation costs low.” She said if the city decides to contract with a private trash service, it could lose the transfer station and be unable to relicense it. That would make returning to public trash pick-up more expensive, limiting the city's options down the road.

The task force plans to meet twice a month, at 6 p.m. on Thursdays, in council chambers, but which weeks may vary according to members' schedules. Johnson said she plans to keep meetings to 90 minutes. The next meeting will be a tour of city facilities. Future topics will include current recycling methods, automated systems and a discussion with the executive director of the county waste district.

The task force’s final report and non-binding recommendations are due in October. All meetings are open to the public. You can listen to audio of the meetings and track the task force’s progress at https://tinyurl.com/clehtstrash.