Seventh-graders beat out professionals in design and build challenge 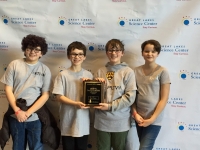 When four Heights Middle School students, Arthur Schmiedl, Caleb Green, Marcus Holland and Ruby Tugeau, signed up to compete in the Feb. 9 Design & Build Challenge at Great Lakes Science Center, they and their Project Lead The Way (PLTW) teachers, Amy Statler and Dianna Neal, had no idea what to expect.

As it turned out, the seventh-graders found themselves competing against 18 youth teams from area middle and high schools, and another dozen corporate teams made up of professionals and college students.

And, it turned out that the Heights team earned first place—in both the youth category and overall—beating out teams from Parker Hannifin, Sherwin Williams and Case Western Reserve University.

On the day of the challenge, the students received a box of materials and instructions to build “a vehicle that could defy gravity” by successfully stopping at the top of a hilly track. They had two and a half hours to design, build, test and revise their creation using everyday items such as toilet paper tubes, straws, duct tape, Lego wheels and small weights.

Statler described being nervous at seeing how slowly her students started out. “Some teams were already testing their designs and our kids only had two wheels on their car!” she recalled.

Working carefully and creatively, through much problem-solving and trial and error, the students prepared for the first test. Their car stopped perfectly at the top of the first hill, earning 50 out of 60 total points. They earned the same score in the next two heats, proving their design was consistent, plus an additional 25 in the bonus round, in which their vehicle had to fly off a ski jump.

“It was pretty amazing,” said Statler. Neal added, “They just came up with a really fantastic design.”

The four seventh-graders are all enrolled in the PLTW Design and Modeling course. PLTW is a national engineering curriculum utilized by Heights Middle School and Heights High.

The students all said they were glad they had volunteered to participate, and would happily do it again. Arthur Schmiedl’s parents, Adaora and Eric, said they were impressed with their son’s willingness to take risks, and expand on his usual interests, which his mother characterized as “more literature- and music-focused.”