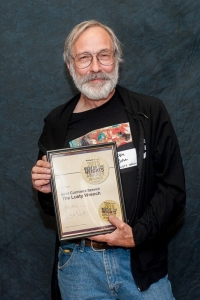 Sam Bell, owner of The Lusty Wrench, holding his 2015 Best of the Heights award for Best Customer Service.

Cleveland Heights has many intelligent, knowledgeable, skilled, dedicated and civic-minded entrepreneurs. Sam Bell, who has been one such local treasure for nearly 40 years, made the decision to close his business, The Lusty Wrench, as of mid-March.

Bell started The Lusty Wrench in 1979, after having taken his own car to be serviced before a road trip. Despite the “trip check,” the car broke down en route. The frustration of having just paid a professional to attend to the car to prevent such misery and inconvenience spurred Bell to wonder: “Is it feasible to run an auto repair shop based on competence, honesty and integrity?” He opened The Lusty Wrench the next week.

Bell said of his business, “Our goal has always been to provide excellent mechanical repair and maintenance services to all our automotive customers. We’re in the service business, so our job is to say, ‘Yes.’”

“Our customers see the results of our continuing devotion to ongoing training to stay on top of rapidly evolving technologies. Over the years,” said Bell, “many customers have become friends. My employees are as devoted to service as I am, and they are the key to our success.”

Bell cited “a number of factors” for his decision to close The Lusty Wrench. “Mostly,” he said, “it’s a question of age and energy. Auto repair is still very physically demanding work, and some mornings I can barely move my fingers. I’ve been doing this for 50-plus hours a week for 40 years.”

Asked about his plans for the future, and how he’ll spend his free time, Bell replied, “Don’t worry. I’ve just founded a new company called RoadPrintz that is developing a robotic system to paint turn arrows, crosswalks, bike symbols, etc. on streets and roads. We’re demonstrating proof-of-concept now, and will be working toward a prototype over the next two years. It’s exciting!”

Bell offers this advice to his eco-conscious customers: “The world is on fire, and we in Northeast Ohio live in an air-quality non-attainment zone. The private automobile is the spawn of the devil. Give up your car, at least as much as you can: walk, bike, take public transit, or carpool instead.”

Bell himself has been honored with awards and other recognition, including being named ASE Technician of the Year in 2010, and receiving an Entrepreneurs for Sustainability award as a Champion of Sustainability for his pioneering concept of what he calls “eco-conscious auto repair.” He is profiled in Case Western Reserve University’s Weatherhead School of Management’s “Business as an Agent of World Betterment” collection.

Patti Substelny was a Lusty Wrench customer for more than 20 years, and is a proud resident of Cleveland Heights.