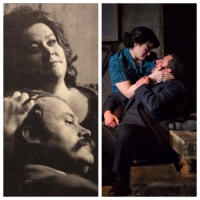 On Saturday, April 13, Ensemble Theatre in Cleveland Heights will host a benefit gala to celebrate 40 years of providing Northeast Ohio with professional theater.

The gala fundraiser will include live music, select preview performances from the upcoming season, silent auction items, and food from local sponsors, including The Fairmont, Nighttown, Luna Bakery and Café, The Stone Oven, and Poison Berry Bakery.

Founded in 1979 by Lucia Colombi, Ensemble Theatre was started in the spirit of producing American classic plays, including those of Eugene O’Neill, of whom Colombi was particularly fond. Among its many award-winning productions over the years was the “Panorama of African-American Theatre” series, which was filmed by PBS, syndicated nationally and chosen for the network’s “First View Award” as one of the top 25 educational programs in the country.

Celeste Cosentino, Colombi’s daughter, took over as executive artistic director after Lucia’s passing in 2009. The theater has been a huge part of her life for the past 40 years. “I was born in October of ’78 and Ensemble was created in the summer of ’79, so we are both 40 this year,” Cosentino said. “My mother spent many years as the artistic director at Karamu House, and that place also played a very important role in my growing up. The theater is my church. There have been so many wonderful memories I have had over these 40 years, of actors who have come and gone, both to and from Cleveland, and those who are not with us anymore.”

With nearly 200 productions over the past four decades, Ensemble has won many awards from local organizations. In recent years, Ensemble’s productions of “The Normal Heart,” “The Iceman Cometh,” “Thurgood,” “The Night Thoreau Spent in Jail,” and both parts of “Angels in America” have garnered acting, directing and design awards for the talented greater Cleveland artists who have graced Ensemble’s stages.

While American classics may have been Ensemble’s initial focus, the theater’s programming has expanded to include modern masterpieces and new works from local playwrights. With the inception of its StageWrights writers group in 2010, Ensemble has fostered new plays, and has produced the Colombi New Plays Festival as a showcase of new work from local writers since 2012. After moving to the Coventry school building in 2011, Ensemble has continued to bring new and exciting theater to Cleveland Heights.

What her mother began 40 years ago is still thriving, and Cosentino does not foresee slowing down. “What I can say is that I was so very lucky that my mother left me a very vibrant and tangible legacy and something that lives in the soul of Cleveland's theater history,” she said. “I hope that the new legacy for Ensemble Theatre is to become an anchor institution on our very special corner here in Coventry, to help the Coventry Village district thrive and grow, and to have Ensemble continue to bring amazing scripts and groundbreaking theater to Cleveland Heights long after even my shows are over.”

All are welcome to celebrate Ensemble’s success at its 40th Anniversary Benefit and Gala on April 13, 7–10 p.m. Tickets can be purchased at www.ensembletheatrecle.org/benefit, by calling 216-321-2930 or by e-mailing info@ensemble-theatre.org.

Tyler Whidden is a playwright, director and actor with Ensemble Theatre.