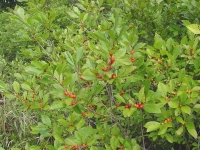 Plants have been moving around the globe for millennia, hitching rides on mammals, traveling through avian digestive systems, and riding the wind. Explorers collected them on one continent for agricultural, medicinal and other uses on another.

Gardeners and nurseries have cultivated species to feed and delight us. The taste of a delicious Evercrisp apple and the fragrance of lilacs, native to Eastern Europe and Asia, are unquestioned pleasures.

But plant migration and cultivation have had unintended consequences throughout most of the world. Each continent struggles with non-native species that have become aggressive and invasive, and threaten healthy habitat and biodiversity. Many plants that we’ve invited into our gardens are now domineering, unwanted and dangerous guests in our native ecoregions.

An in-depth look at identifying, removing and replacing invasive plant species, “Plant This, Not That,” will be presented on March 21, 7 p.m., in the Brody/Nelson Room at the Lee Road Library.

Why do non-native species pose such a threat? They grow unchecked by insects, birds, and other plants that compete with them for space. Many create monocultures that are food deserts for native insects and birds. Biodiversity is important to all life on earth.

Chinese privet is an example of a common Ohio hedge that has negative consequences for healthy habitat. Introduced to the United States in 1852 as an ornamental shrub, it rarely stay in its planted rows. Birds eat and spread the berries, which are less nutritious but more common than our native shrub berries. A walk around Lower Lake in the Shaker Parklands reveals privet of all sizes dominating the shrub layer. Privet also leafs out earlier in the spring than native shrubs, preventing native wildflowers from blooming by shading them.

Japanese barberry, another common yard plant here, is also fast-spreading, both by root and by bird- and rodent-carried berries. It is associated with higher populations of deer ticks (a threat to humans) because tick-carrying mice can safely avoid predators among the thorns of the barberry.

What can we do in our yards and public spaces? We can garden with native trees, shrubs, vines, ferns and flowering plants. We can increase biodiversity and provide food and homes for native insects that are food for native birds. As entomologist and author Doug Tallamy advises, “Garden as if life depends on it.”

We can learn what non-native plants are in our yards, and remove and replace them as possible. The state of Ohio publishes lists of invasive plants, including those whose selling is banned. Replace privet with the native holly inkberry. Replace burning bush with highbush blueberry that also has spectacular fall color.

The March 21 program is one of a free series of talks on ecological gardening. For information about upcoming talks, visit  www.doanbrookpartnership.org/upcoming-programs/events.

Peggy Spaeth is co-chair, with John Barber, of Friends of Lower Lake.