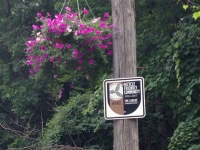 The League of American Bicyclists first recognized Cleveland Heights as a bronze-level Bicycle Friendly Community in 2013.

Heights Bicycle Coalition (HBC) traces its history back to May 2010, after an application submitted to the League of American Bicyclists resulted in Cleveland Heights being recognized with an Honorable Mention as a Bicycle Friendly Community. The goals of HBC were to help make the Heights even more bicycle friendly and inspire residents to use bicycles for commuting and recreation.

To that end, in October 2010, HBC leaders met with officials from University Circle Inc. (UCI) and the city of Cleveland Heights to ask for improved bicycle connectivity between the Heights and University Circle, which has had some of the largest employment growth in the state of Ohio. Many Heights residents work in the Circle, which now connects nicely to downtown Cleveland thanks to the Health Line and bike lanes on Euclid Avenue. Heights bicycle commuters wanted their ride to work to be safer and more convenient.

Everyone agreed that encouraging bicycling between the Heights and the Circle was a good idea. For example, UCI President Chris Ronayne cited the high cost of building garages for cars, and noted that the opportunity for institutions to expand had been compromised when much of the limited supply of land in the Circle was used for parking.

Fast forward to today. After six years of planning and raising funds, much-improved routes are now in place, with more improvements to come. Here’s some of what’s been accomplished.

These are highlights of progress that has mainly improved connections between University Circle and the Heights. Thanks especially to the Cleveland and Cleveland Heights Planning and Public Works departments for making this all happen, including gaining funding from NOACA and others.

There’s more progress to celebrate around the Heights. Watch for more in future columns.

Heights Bicycle Coalition is a 501(c)3 nonprofit dedicated to educating and encouraging Heights community members to use bicycles as a sustainable and healthy form of transportation and recreation. This article was written by Mary Dunbar with assistance from the coalition's Communications Committee and president.