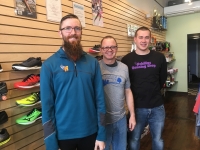 Owner Jeff Fisher is excited to announce that his Lee Road business, Cleveland Running Company, is merging with the Achilles Running Shop, a like-minded regional running store with locations in Mentor and Erie, Pa. As of press time, the store's new name had yet to be finalized.

The merger came about quickly. Fisher and David Jacobson, general manager of Achilles, met in December 2018. Familiar with one another through the industry, it was business-sector kismet. The future partners began discussing the merger in January 2019. By early February, the partnership was designed, the lease transferred, the inventory management software in use, and the management team was enjoying day-to-day collaboration.

“It’s a win-win,” said Fisher, who is excited for customers to experience the expanded inventory, expertise and programming that is on the horizon.

Achilles is owned by a podiatrist, Dr. Mark Mendeszoon, who saw his patients misfitted for athletic shoes countless times, and wanted his own store so his patients could get properly fitted.

“Fitting shoes is a bit of an art form,” stated Fisher. In agreement, Jacobson added, “We give a genuine recommendation, working until the gratifying moment of finding a fit. Fundamentally, that is the base that predicates both businesses.”

Fisher and Jacobson attributed part of their easy rapport to the fact that they both spend a lot of time enthusiastically delving into and assessing products before they hit the stores’ display walls.

The Cleveland Running Company has been at its Lee Road location since 2016, after five years at its former home on Van Aken Boulevard in Shaker Heights. Achilles opened its Mentor store in 2006 (relocating in 2011), and its Erie store in 2009.

Fisher had spent 23 years in the industry when he realized that he wanted to have his own store. The driving force was the pleasure Fisher takes in sharing his passion for running. "The customers become your friends," he said.

Fisher brought the store to Lee Road because he always wanted to be in a neighborhood setting. “This was much more of what I always pictured—an integrated business and residential district, walkable, family-oriented and runner friendly,” explained Fischer. “On a nice Saturday, with so many people walking around, it’s a great place to be.”

Fisher’s new business partners agree, with Jacobson saying he is pleased to be expanding to the Cleveland Heights location. “It’s a different vibe,” he said. “There are a lot more people out and about. People are friendly and interested in talking to staff.”

Achilles manager Kyle Griffith, who will work full time at the Lee Road store, said he is enjoying the process of becoming familiar with Cleveland Heights. “It has a very different feel than our other locations.”

While there will be some new staff at the Lee Road store, familiar faces will remain. “All of the staff are staying,” said Fisher.

The merger will bring with it aesthetic upgrades to the Cleveland Heights store, a new name and logo, expanded inventory access, and more brands.

Another benefit of the merger is that Fischer will have time to get out into the community, doing the education and programming that he loves. Jacobson said Achilles has long wanted to do more community outreach. “Jeff brings a lot more experience to our staff,” he said.

Online reviews show that Achilles is adored by its customers, who value the conscientious staff and fitting process—the very traits for which Fisher’s shop is praised locally and in online reviews.

The Lee Road store will celebrate the changes with an open house sometime in April. Visit www.clevelandrunning.com for information on the open house and other upcoming events.