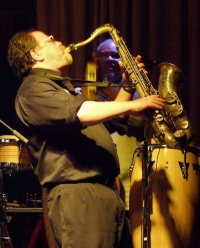 Norman Tischler, soloing with the Cleveland gospel group the Prayer Warriors at a 2008 rally for Barack Obama, featuring Peter Yarrow (of Peter Paul and Mary), whom he also backed up, at the Beachland Ballroom.

Norman Tischler lived in Cleveland Heights for decades. He moved to the area in 1969, three or four years out of college, when he was a VISTA volunteer, assigned to the Karamu House in Cleveland, where he taught kids music and also taught them about music.

He was an extraordinary musician, who played with just about every other musician in the region, and with some nationally known ones. No, really—just about every one in this region. It sounds implausible, but he was always everywhere, it seemed, and never without his instruments. And he knew everyone. Some percentage of them—about 500 people, and, it appeared, about half of them musicians—showed up for his memorial service last month at The Temple-Tifereth Israel in Beachwood.

Norm died on Jan. 21, at the age of 72, soon after a sudden diagnosis of cancer. During his final week, his hospital room constantly overflowed with musicians and other friends, and, much of the time, with music.

The bands Norman played in over the years included the nationally touring and recording Tiny Alice, plus Freewheelin', Gopher Broke, Bazooom, the Motion, Easy Street, Blue Lunch, InCahootz, the Travis Haddix blues band, and several more. And that list doesn't include bands with whom he occasionally sat in, and solo artists he often backed up. He also served as the director of the Workmen's Circle Klezmer Orchestra for many years, and played in a long-running production of the musical “Beehive.”

For many years, his answering machine's outgoing message included his upcoming gigs, which he always called his "shameless self-promotion." He didn't need to call it shameless, because there's no shame in a good musician promoting himself. It may have been relentless, but not necessarily shameless.

When I moved back to Cleveland from New York in the summer of 1972, Norm was one of the first people I met, introduced by a fellow-musician friend. I asked Norm what he played and he said, “Sax.” Our mutual friend told him I was a record producer, and Norm said, “And flute. And clarinet. And trombone.”

I started producing and/or arranging records that I and other musicians were recording around town, and I hired Norm to play on almost every one of them. In fact, I often arranged according to what Norm played. If I needed a horn section, it would be alto sax, tenor sax and trombone—all Norm, multi-tracked. If I needed winds, it was sax, clarinet and flute. It was all-Norm, all the time.

That started in ’72, and it didn’t stop. Just a few years ago, I arranged and co-produced my brother Noah Budin’s CD, Metaphor, and Norm played on that, including a Clarence Clemons-worthy solo on one song. And, as Norm used to say, “They call Clarence Clemons the black Norman Tischler.”

Norm played, with me, for 20 years in Noah’s backup group, the Promised Band. The three of us also played together for 16 years in The Temple-Tifereth Israel's Rock My Soul Shabbat band. And Norm and I played together for many one-off performances for various organizations, such as Roots of American Music benefits.

But he didn’t play with me in my group Long Road. He asked me if I wanted him to, but I told him it was an acoustic folk group, with guitars, banjo, mandolin, Celtic harp, autoharp, dulcimer, ukulele—all stringed instruments. Norm looked at me for a second and said, “So—do you need a sax?”

On Martin Luther King Day, the day Norm died, I backed up my brother Noah in his annual MLK Day concert at Stone Gardens Assisted Living on the Menorah Park campus in Beachwood. When it ended, an older woman came up to me and said, “I remember you from Noah’s last concert. I thought it was so nice when you went over to Noah after the concert and gave him a kiss.” I said, “That wasn’t me. That was Norman Tischler.” She said, “Oh—I thought it was you. Are you sure?” I said, “Yes. It’s not the kind of thing I would do, but it IS the kind of thing Norm would do.” Trying to be kind, she said, “Well, I’m sure you’re a nice, warm person, too.” I said, “Well—I’m not. . . . But Norm was.”

And that’s true. Norm was.