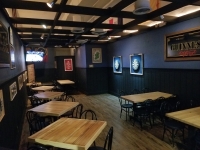 The restored interior of Kensington Pub.

More than a year after they first hoped to open, in December 2017, the co-owners of Kensington Pub (2260 Lee Road) now hope to open within the next month—or two. Brad Poe and Jeff King faced bigger remodeling challenges than they expected in opening their first restaurant—what Poe called a "perfect storm of obstacles."

“The original proposed opening was totally unrealistic in retrospect,” said Poe. “We encountered more renovations than we anticipated, especially since it was our first foray into restaurant ownership.”

He noted that he's  “very pleased with the exterior renovations, even with construction delays.” The exterior work was financed by the building’s landlord as part of a block-long renovation.

The project has been a labor of love for the two longtime Cleveland Heights residents who have more than 40 years of restaurant experience between them.

The gastropub is located at the corner of Kensington and Lee roads, formerly the site of The Tavern Company, which moved across the street to the site of the former Colony Restaurant and Tavern.

Poe and King have respected the history of the space by restoring the familiar bar, tables and chairs, while adding a new floor, windows, doors and fully remodeled bathrooms.

The kitchen will stay open until 2 a.m. daily, serving a late-night menu. Weekends at Kensington Pub will feature Saturday lunch and Sunday brunch.

“We love the people here. We wanted to bring something special to the area,” said Poe, who envisions Kensington Pub as an exciting and fun place to which people will want to bring their kids.

“Inviting, comfortable, and kind of homey,” he said, is the goal.

For more information—and for sneak peeks inside the pub—follow The Kensington Pub on Facebook.

Mostly a mom, Shari Nacson, is a freelance editor, social worker, and nonprofit consultant who makes her home in Cleveland Heights.