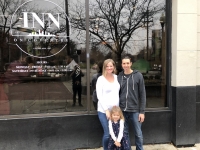 Co-owners Eddie and Erica Zalar with their daughter, Nora.

The Inn on Coventry, located at the corner of Coventry Road and Euclid Heights Boulevard, has been serving up delicious breakfast and lunch fare for 37 years. Popular among many Heights locals, it’s not uncommon to run into someone you know at the inn. The casual, open dining room creates a social atmosphere while also maintaining a cozy, homey feel.

Under continuous family ownership since its 1981 opening, the inn changed hands in January 2018 when the owners decided to retire. Eddie Zalar, a Chardon native and the former owner of Nora, an upscale Italian eatery in Little Italy, purchased the restaurant.

Zalar, who now lives in Lakewood, is a graduate of The Culinary Institute of America (CIA) in New York. He worked in several restaurants before moving back to Ohio in 2015 to open Nora. Creating and maintaining a successful business at Nora required Zalar to work long hours. With his second child on the way, the daytime operating hours of the inn were appealing, and so he made the switch.

Zalar’s CIA training prepared him with skills that he uses at the inn. “They taught classical French cooking like omelets. It was a good fit with The Inn’s menu,” he said. Among the first things that Zalar learned how to cook as a child were crepes—coincidentally a longtime mainstay of the inn’s menu. “My parents taught me how to make crepes when I was little.” he said. “My training has come full-circle.”

When Zalar took over ownership of the inn in January, he knew he was inheriting a business that was not only successful, but also a Heights favorite.

“Keep what works” became his motto. Aside from deleting a few low-selling lunch dishes, he has kept the menu much the same. “We kept all the favorites,” he said. “The Inn has had a good thing going for over 30 years, why change it?”

A welcoming and friendly staff has also been a hallmark of the inn over the years. Zalar encouraged all of the existing staff to stay on. “Many of our staff members have been here for years, all the regulars know them. Our cook has been here for 30 years,” he said. The restaurant business generally has a high staff turnover rate, so Zalar recognized that having a veteran staff was an asset.

Although the inn’s menu doesn’t allow Zalar to use much of what he learned in his culinary training, the daytime hours allow him to spend more time with his family. “I get to have some fun with the daily specials,” he said, “but I also get to cook for my family now.”

Running the inn remains a family effort. Eddie’s wife, Erica, is co-owner of the inn, and his daughter, Nora, is teaching him sign language so he can better communicate with a hearing-impaired customer.

Zalar loves the diversity of the restaurant’s patrons, and commented, “The customers are great. We have students, nurses, doctors, lawyers, and people from all walks of life. Everybody is welcome.”

The inn’s lunch menu is small and concise, including classic favorites such as soup and salad, club sandwiches, and grilled cheese. The menu’s Burger Shop allows patrons to create their own burgers by choosing from a beef patty, chicken breast or black-bean burger, and adding their choice of toppings.

Breakfast and brunch are the most popular mealtimes at the inn. The menu includes standards such as eggs any style, corned beef hash and French toast, as well as specialties such as Eggs Mando (Eggs Benedict with avocado), and Croissant Sisterhood (lox and scrambled eggs with Hollandaise sauce). For any first-time visitors, Zalar recommends coming for breakfast and trying his favorite dish, the lemon-ricotta pancakes.

Asked what he thinks has given The Inn on Coventry its staying power over the years, Zalar replied, “Every neighborhood needs a diner. Fine dining restaurants come and go, but neighborhood diners are timeless, they never go out of style.”

The Inn on Coventry (216-371-1811) is located at 2785 Euclid Heights Blvd. Its website, www.innoncoventry.com, is currently under construction.

Judith Eugene is a native of Cleveland Heights who provides life-enrichment classes and activities for senior adults and those with physical and mental challenges through www.lovinghandsgroup.com.