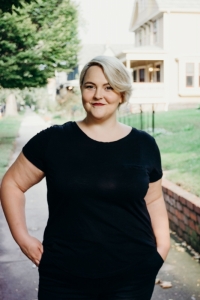 Mallory Phillips is the new Executive Director of the Coventry Village SID.

It’s a behind-the-scenes job that makes a ton of difference for our community. In her role as Executive Director of the Coventry Village Special Improvement District (SID), Mallory Phillips attends board meetings; oversees neighborhood events, marketing, and street beautification; connects with property owners and merchants; communicates among the board, the city, merchants, and the neighborhood; and increases awareness of and the direction for the Coventry district.

Phillips was drawn to the opportunity because she has long felt that there is something special about Coventry. Phillips moved to Cleveland after visiting a friend in Westlake several times over the years. Every time she came to town, Coventry was a destination. “Coventry was part of my first impressions of Cleveland and became a quick part of my own experience,” she said.

Coming from Los Angeles, the “east/west thing didn’t matter,” said Phillips, who found herself hopping over from Ohio City to spend the full day in Coventry. “Where else can you spend the afternoon at a coffee shop, have dinner, run errands, and end the day with a late-night show at the Grog Shop?”

It is with this profound affection that Phillips lights up. Noting how condensed and walkable the community is, Phillips pointed out that Coventry touts many values “for a regular lifestyle.” Beyond the accessibility, since she began work on Oct. 1 Phillips has been most impressed with the rapport and sense of investment among the merchants. “Something that is really special about the Coventry merchants,” Phillips reflected, “is they are a really wonderful group who care about the people who live there. They care about the history of the neighborhood and the future of the neighborhood.”

According to Suzanne DeGaetano, owner of Mac’s Backs, “The Coventry merchants are really looking forward to working with Mallory Phillips. She is enthusiastic about indie retailing, collaborations, and community partnerships.”

Phillips is excited to amplify what the merchants are already doing. “I’m really excited to be able to help in this way,” she said. On the docket are some new ways to engage the community. Watch for a Dec. 8 Coventry Village Holiday Festival full of new flavors and twists that will appeal to all ages, all day long.

Mostly a mom, Shari Nacson, LISW-S, is a freelance editor, child development specialist, and nonprofit consultant who makes her home in Cleveland Heights. More than anything, Nacson is inspired by kids and adults who build connection through kindness.