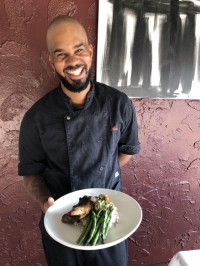 Executive Chef Alvin Harris thinks Cedar Lee is poised to be the Cleveland area’s next Tremont, a center of what he calls the “Progressive American” culinary movement, a place where you can “put on jeans and a nice shirt” and still enjoy “fine dining.” That’s why Harris and his partners chose to open their new restaurant, Elite Bistro (2195 Lee Road), in the evolving Cleveland Heights neighborhood.

“It’s getting there now. Boss Dog Brewery, that was a major plus in this neighborhood. Taste up the street. Lopez. Good pizza, good bars,” Harris said.  He hopes Elite Bistro will add to the Lee allure for foodies.

Harris grew up in Shaker Heights. His culinary career started by accident and took him through many of Cleveland’s best kitchens. He fell into cooking when he dropped out of college in Atlanta and returned to Cleveland to crash at his brother’s apartment. He responded to a Craigslist ad for a dishwashing job at Marigold Catering, and was hired on the spot. Soon he advanced to arranging dessert trays and helping catering crews.

“At that point, I was like, maybe I need to go back to school,” said Harris. “I really like where this is going.” But Michael Smith, who was then director of food operations at Marigold (and is now owner of the Krav food truck) talked Harris out of culinary school. “He said, ‘No, I’ll teach you everything you need to know,’” Harris said.

Harris stayed at Marigold. With Smith’s encouragement, he eventually left to work for Brandon Chrostowski at Edwins in Shaker Square. In 2013, Harris was part of the team that opened the innovative restaurant serving award-winning French cuisine while training formerly incarcerated adults. “Line cook, server, busboy.  I worked the fromage (cheese) cart. I did everything,” explained Harris.

His Edwins experience opened doors to other restaurants. He worked under Executive Chef Andrew Gorski at both Tremont Tap House and Butcher and Brewer. When Gorski left to launch Parker’s in the Kimpton Schofield Hotel downtown, he asked Harris to come with him as executive sous chef. It was a huge break for Harris, who said, “I felt like this guy was going to elevate my game. I owe it all to him.”

Harris won’t categorize his cuisine. He wants to surprise guests with riffs on familiar dishes, for example the Soft Grits with Seared Scallops and New England Street Corn. “You see shrimp and grits all over the place,” said Harris, but his version has “amazing U10 (10 or fewer per pound) scallops with a nice brown sear on them. You get the soft bite of the grit with the nice crunch of the corn then you have a mix of American cheese and queso cheese. It just ties in well together.”

He’s also excited for patrons to try his Airline Jerk Chicken. (Note: “Airline” refers to the skin-on boneless breast cut with the first joint of the wing still attached, not what’s served in the friendly skies.) “It’s not overbearing on the heat,” he said.  I don’t want to scare people off with too much spice.”

Harris said all entrees will include a vegetable and starch to keep prices in a reasonable range. Menus, which will be available on the restaurant’s website, www.elitebistrocle.com, will change with the seasons and based on customer feedback. The restaurant has a full bar with an extensive wine list and cocktail menu.

Elite Bistro serves dinner only Tuesday through Thursday, lunch and dinner Friday and Saturday, and brunch on Sunday.

The interior of Elite Bistro has been remodeled along clean, contemporary lines. It's at the site of the former Fix Bistro, which closed in July. Despite the name similarity, Harris said there’s no relationship between the two restaurants. Elite Bistro held its grand opening Sept. 30.

Fred D'Ambrosi has been a journalist for 40 years, most recently as news director at WOIO/WUAB Cleveland 19. He's lived in Cleveland Heights since 2015.