The World Series and other connections 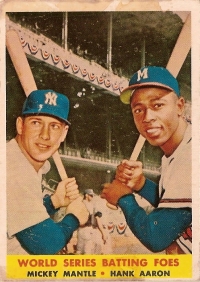 A 1958 baseball card featuring stars of the '57 World Series, the Yankees' Mickey Mantle and the Braves' Hank Aaron, with same kind of poor-quality color as a 1957 color TV.

October 1953 was the first time I heard the term “World Series.” I was 4 years old, and I heard it at my grandfather’s house a few days after my grandmother died.

My father, who had grown up in Cleveland Heights, joined the Navy shortly after the United States entered World War II. He was stationed in San Francisco. My parents got married during the war. After the war, my parents stayed in San Francisco. My father got a good job selling records in a big department store, which was the only place you could buy records then. The record department was next to the furniture department, because that was the only place you could buy record players, which, in those days, were pieces of furniture.

My parents were happy out there. Then, in 1948, my father’s brother, David, died. My father came back to Cleveland for the funeral, while my mother stayed in California with my older brother, who was still a toddler. During my father’s visit to Cleveland, my grandfather convinced him to move the family back here. He told him there was a good job for him, and that they were building a nice house for them. He told my father a lot of great things that would happen. He was, as my family sometimes said, exaggerating—or, as I call it, lying.

They returned and found there was no job, no house, nothing. So, they moved into the upstairs unit of a duplex on Belmar, where my grandfather’s brother and sister-in-law—who owned Budin’s Delicatessen on Coventry—lived downstairs.

A few months later, I was born. When I was 4, in 1953, my grandmother died. That year, Queen Elizabeth II had her coronation in England; Dwight Eisenhower was elected President of the United States; Elvis Presley made his first recording, a one-off acetate disc, which inadvertently became his amateur audition at Sun Records in Memphis; and transistor radios and color televisions became available.

I saw my first color TV when I was 8 at a kid’s house on our way home from Coventry school and the World Series was on. It was the New York Yankees versus the Milwaukee Braves. I still remember how it looked, how unnatural the colors were, but, still, how cool it was.

The advent of the transistor radio was one of the elements that allowed rock ‘n’ roll music to flourish. Elvis was one of its first stars, and, arguably, the most important of that initial era. But rock music was not yet a factor in 1953—the Number-1 record of that year was Dean Martin’s “That’s Amore,” from the Martin and Lewis movie of that year, "The Patsy." They were the biggest stars of that time, appearing in movies, on TV, and in nightclubs and theaters, and putting out records, on the Capitol label.

Jerry Lewis told me, when I interviewed him in the 1990s, that when they played places like the Paramount Theater in New York in 1953, “the kids screamed for us like we were Elvis Presley or the Beatles.” He didn’t know, in 1953, that they were screaming for them like they were the Beatles, because the Beatles wouldn’t be screamed at till 10 years later, starting when they got signed to Capitol Records in this country and arrived here from England to make their first appearance on American television, on "The Ed Sullivan Show," shortly after the assassination of President John F. Kennedy, who had succeeded President Eisenhower.

It was also around this time that Coventry Road in Cleveland Heights started its transition into a hippie haven, and I was right there, still living on Belmar, a couple of streets away.

So, when I was 4, and my grandmother died, I tagged along with my father, every morning for the seven days following my grandmother’s funeral, to my grandfather’s house, where my father served as part of the minyan, a group of 10 Jewish men who gather to recite prayers of mourning.

It was early October. My father was the only man there not of his father’s generation. He had learned Yiddish growing up in the 1920s and ‘30s. He could hear the older men conversing in Yiddish in between the Hebrew prayers, and every day, for the first six days, he told my mother that there were a couple of Yiddish phrases these guys kept saying that he couldn’t understand. On the last day, he actually listened to their conversation and in the middle of the prayers of mourning, he said, “Ohh . . . that’s what you’re saying—'Brooklyn Dodgers’ and ‘New York Yankees.’" I asked him what that meant and he told me those were the teams playing in the World Series. I had no idea what that meant. But I recall that scene every October.