It's a night on the town 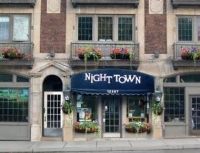 Though Nighttown has expanded seven times since it opened in the mid-'60s, customers still enter through this door, and, it appears, will continue to do so for many more years.

Last September, I attended the first public meeting for the Top of the Hill Project, the development of the plot of land where Cedar Road and Euclid Heights Boulevard come to a point, at the apex of Cedar Glen Parkway, which we all call Cedar Hill. The meeting took place at the Community Center. About 150 people attended and expressed about 237 ideas and opinions. One thing that everyone seemed to be in agreement on, however, was that Nighttown should be left alone. No one wanted to see it go.

But why? What’s the big deal? It’s just a restaurant, and Cleveland Heights is home to tons of restaurants. Well, it’s also a nightclub. But, again, there are a lot of places here that offer live entertainment.

But . . . it’s also the biggest restaurant in Cleveland Heights, and probably on the whole East Side of Cleveland, which must mean it’s good, if it has needed to expand so much—seven times, so far—to accommodate so many people. And it’s the longest-operating restaurant in Cleveland Heights, and one of the oldest in the region, which must mean it’s good, to have lasted this long.

And it offers world-class entertainment; artists that could, and do, appear in much larger venues. A few weeks ago, I went there to see a remarkable collaboration between Peter Asher and Jeremy Clyde, of the two big 1960s British Invasion duos Peter and Gordon and Chad and Jeremy. And Nighttown’s very long list of international, national and local performers includes Long Road. That’s my group. So, right there, you can see they have taste and class. But, if you insist on more proof, here are a few others:

Nighttown opened when I was in high school. But the space had served as a bar long before that. There were four separate stores on the first floor of the 1920s building. When John Barr bought one of the middle storefronts, the Silhouette Lounge, in 1965, it became Nighttown, named after the Dublin red-light district in James Joyce’s Ulysses. Over time, Barr took over the other three adjoining storefronts and merged them all into Nighttown. He also amassed the 275 pieces of artwork that adorn its walls.

I left Cleveland for a few years after high school. When I moved back in 1972, it had become the most prestigious restaurant in Cleveland Heights. This was a few years before the big food boom in Cleveland, but, regardless, it was still one of the top spots in town.

Dublin native Brendan Ring, who had served as Nighttown’s general manager since 1993, purchased it from Barr in 2001. Among his other innovations, Ring has added three outdoor dining areas. So, with six dining rooms, three bars and three patios, seating capacity now totals 550. Ring also brought in Jim Wadsworth early on, to handle music bookings, greatly expanding on the single piano players the club originally employed.

In 2003, when the northeast quadrant of the U.S. lost power on a hot August afternoon, I listened to a portable radio for news updates. At one point, I heard that Nighttown was open, powered by a generator. I rushed over for dinner with my teen-aged kids. The place was totally packed, despite scant air conditioning, and warm water. It was open and serving the community—and beyond: Prince Albert of Monaco, in Cleveland for the Great Lakes Pentathlon, was also there, dining with his 20-person entourage.

Five years ago, my family held my mother’s 90th birthday party on Nighttown’s Stephen’s Green patio, on a sunny Saturday afternoon in July. Ring, himself, picked up my mother and four of her nonagenarian friends from her building and chauffeured them to the gathering in Nighttown’s limousine. “How did it go?” I asked him when he got there. “It was a bit of a push,” he answered pleasantly, in his Irish brogue. I knew he was downplaying what must have been an ordeal. I appreciated it.

Just as Cleveland Heights residents—many, I could tell from Facebook—appreciated last month’s official announcement from the Top of the Hill developers that they were creating 50 parking spaces for Nighttown as part of the project. That meant Nighttown was not going away.