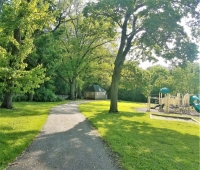 The path still leads to the 1930s-era stone building that served as the Cumberland Park activities directors' shack, where kids could ask for Carroms games and other supplies. Where the jungle gym is now, there were picnic tables and a tether ball pole; the softball field—now a large grassy area—was to the right of this scene.

It was June 1961. I had just been released from Coventry School, for the summer and forever. I would be starting Roosevelt Junior High in the fall. Roosevelt stood on the land where Boulevard Elementary School is located now. Boulevard was there then, too, but in a different building. Roosevelt drew students who had gone to Coventry, Boulevard and Taylor schools.

On the first day of summer vacation that year, after sixth grade, I headed to Cumberland Park, correctly figuring it was populated mostly by Boulevard school kids, hoping to meet some who would also be going to Roosevelt in the fall.

Cumberland Park was very much the same then as it is now. One difference was that where the playground is now, and was then, there were many organized activities for kids of all ages, directed by a couple of college guys.

I met all kinds of kids there. At first, I was attracted to the older greaser guys. They seemed more interesting because they were bad and they mostly talked about doing bad things. A couple of them, two brothers, became involved in a famous murder about 12 years later, and no one who had ever known them was surprised. But that whole group got boring pretty quickly because they never talked about anything useful.

So, I joined the Cumberland softball team. Those guys were nicer. And almost all of them would be going to Roosevelt, so I would know a bunch of new kids right away, when school started.

I liked pretty much everyone on the team, except for this one guy. I can’t remember anymore why I didn’t like him, but I didn’t. Then, when school started in the fall, I found this same kid sitting next to me or behind me in every one of my classes. Both of our last names started with B-U, so there we were. However, I soon began to notice that we both laughed at the same things, and often at things no one else was laughing at. And then we both started quietly making jokes in class that both of us found funny. So we started talking in between classes. And we both played on the Roosevelt football team and started hanging around together after football practice.

Soon we were best friends and spent most of our time together that school year and the following summer, and then in eighth grade and then the summer after that. But in the middle of that summer vacation, he and his family went to visit Los Angeles. What his parents hadn’t told him was that they weren’t coming back to Cleveland; they moved to L.A.

For a while, we’d call each other—after 11 p.m., Eastern time, when the rates went down—but those calls got farther apart and within a year tapered off to nothing. We wrote letters occasionally, too, but those also stopped after a while. In our 20s, we’d sometimes send holiday cards with short notes, but the last one of those was in 1975. He’d gotten married and moved to San Francisco by that time.

Then, in 1993, my wife and I were planning a trip that included a few days in San Francisco, and trying to figure out where to stay in each place we were going. I said, “I’ll call my friend in San Francisco and he’ll invite us to stay at his house.” My wife said, “Yeah, right. When was the last time you saw him?”

I told my wife and she said, “Are you crazy? You haven’t seen this guy since the eighth grade.” I said, “But we had so much in common back then, that we can’t have changed that much.”

My wife reluctantly went along with the plan, and stayed nervous about it, all the way up to the minute we got out of our rental car at his house and she could see that, for us, it was as if no time had passed.

We have seen him and his wife many times since then—in Cleveland and San Francisco, and Detroit and Buffalo, and last year in Alaska, and, when this edition of the paper is published, we’ll all be in Hawaii together.

Almost everything about the world has changed since 1961. But there’s just something about old friends.