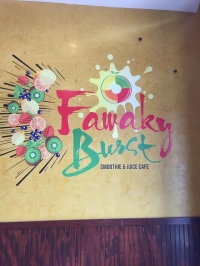 A mural on the wall at Fawaky Burst in Cedar Fairmount.

According to Edwards, “fawaky” is the Arabic word for fruit, which is the main ingredient in many of his smoothies. The café features a tropical mural depicting sliced fruit (making one think of an exotic Caribbean beach or someplace hot), wooden barrels and driftwood-like table tops, and is Wi-Fi accessible.

Originally from New Jersey, Edwards became a clean-eating advocate while playing basketball throughout college in Miami. After college, Edwards moved to Cleveland with a few fraternity brothers who were looking to invest in real estate. He soon found out that being a landlord wasn’t what he’d hoped, although he did fall in love with the city, using it as home base for his developing line of "action" juices.

Edwards started selling juices from the trunk of his car, then at local festivals and events. He also began selling cold-pressed juices in bulk to neighborhood gas stations, where juices were not readily available—certainly not healthy juices.

He opened his first Fawaky Burst Juice Company location three years ago on Mayfield Road in South Euclid, then opened a second one in Summit Mall in Akron. And you may see Edward’s new Fawaky Burst food truck throughout the area this summer; it will be at Walnut Wednesdays at Perk Plaza.

In addition to bottled, cold-pressed and blended juices, available in flavors that include pineapple-ginger and lemon-lime mojito, Fawaky offers a line of detox beverages. A favorite is the Smoothie Pineapple, with blended juices served in a pineapple that is completely edible. Another favorite is the All Green juice, with cucumber, celery, apple, spinach and kale.

Another new Cedar-Fairmount business, ColemanWick (216-402-4888, www.colemanwick.com), has opened in the Cedar Grandview Building.

Odell Coleman, a resident of Cleveland Heights, earned an M.B.A. from Case Western Reserve University, and opened ColemanWick in 2008. Since then, the business analyatics company has grown through word of mouth and needed larger office space.

Coleman said he chose Cedar Fairmount because of its business climate, its diversity of professionals and businesses, the future Top of the Hill development, and the neighborhood’s safety.

Explaining the name of his business, Coleman said, “You can’t have a candle without a wick”—an analogy indicating that a business needs a wick to analyze its business data.

Analyzing data is what ColemanWick does. Coleman and his associates work with primarily regional companies that have revenue between $25 million and $300 million, helping them to embrace big data analytical trends to apply to emotional patterns and purchase history. This enables a business to recognize trends, patterns, and the purchase history of their customers.

According to Coleman, the analytic information allows a business to become more marketable, acquire new customers and, as the end result, make more money. If a company does not have an accountable data system in place, said Coleman, ColemanWick helps it create a useable one.

Kaye Lowe is the executive director of the Cedar Fairmount Special Improvement District.