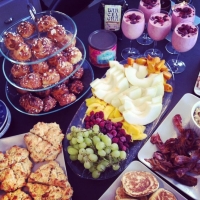 Here's a typical Sunday brunch. Not ours, but somebody's. I found this picture on Pinterest and it looked nicer than ours, so I thought I'd use it.

It’s true. It was at a Sunday brunch at the home of mutual friends in the spring of 1978. If that sounds like it was a long time ago, that’s because it was. Forty years. I did that math in my head—with the aid of four fingers. The 8 on the end helped.

A couple whom we both knew had bought a house in Cleveland Heights. They were the first of our friends to buy a house. They had a house-warming potluck brunch, to which they invited family and friends. As the day wore on, their family members left, but a group of friends stayed, and continued eating all the food that everyone had brought.

At some point, toward the end of the day, someone suggested doing this again, and everyone agreed. The next Sunday that everyone would be available was one month away, the second Sunday of the following month. So, we met again for a potluck brunch.

This time, someone suggested that we do this every month, and again, we all agreed. So, we continued to meet on the second Sunday of each month—for the next 23 years.

For the first couple of years, the brunches took place at that one couple’s home. Then they suggested—actually, it was more like they begged—to move it to someone else’s house, since we all owned houses by then. So, the brunch was held at a different house every month.

We never planned the food at all. Everyone just brought whatever we felt like making. It was great way to experiment with recipes, for those of us who did that kind of thing. And only once did we all bring the same type of dish. But that was dessert, so, you know—no problem there. In fact, at that brunch we feasted on about 15 fancy homemade dessert delights, then one guy arrived late with a store-bought package in hand and declared, “Pound cake!” He was somewhat taken aback by the silence that greeted his announcement.

When the Second Sunday Brunches began, none of us had children. Then we did. So, then there were babies all over. You could say the place was crawling with them. Then there were toddlers, toddling around. Then there were little kids running amok. Then there were sullen teenagers complaining about the food and huddling in the corners, plotting evil deeds. Then there were no kids at the brunches, and we were back to the way we started. But with grayer hair.

Over time, some people moved out of town. One founding member died. The original couple got divorced—though the guy started dating another brunch member, a woman who had been the partner of another founding member, and they later got married. My wife and I started dating early on in the Second Sunday Brunch era, and then we got married. Some people eventually dropped out. But the brunches kept going. And the group kept meeting. And cooking. And eating.

The Second Sunday Brunches ended almost 20 years ago. I think it was when our friend died. She was one of the people who had been a stalwart member since the beginning. I guess we just kind of lost our spirit after that.

But I recommend doing it. You can do it. And invite me. I have a nice dish I developed for those brunches—eggs baked in spinach cups and topped with Parmesan. I’ll bring that. There are onions in the spinach. You can eat onions, right?