Cain Park Bicycle expands and looks to the future 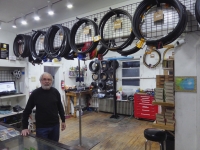 Gary Schumacher behind the parts counter at Cain Park Bicycle.

For generations of Americans, the local bicycle shop was a fixture of the neighborhood, a place where a kid could gain freedom and self-sufficiency by getting a bike, and where adults could continue their own involvement in cycling through commuting, recreation and competition.

Some of those storied local shops in the Heights are gone now—think Pee Wee’s Bike Shop on Coventry or Al’s on Lee Road—but those that remain, thanks in part to the region’s increasing attention to cycling-friendly infrastructure, can be in a position to contribute to the quality of life in our communities and enjoy healthy business in the process.

One such shop is Cain Park Bicycle at 1904 Lee Road, just south of Superior Road. Owner Gary Schumacher opened the shop in 2006 in the same location that had housed Hi-Tech Cycles (whose owner, Marvin Rosenberg, had earlier owned Pee Wee’s).

“What led me into this business was kind of chance,” Schumacher said. “I’ve always been a cyclist and had thought about the possibility of a shop. Twelve years ago, I found out Marvin was interested in selling. At the time I was basically getting fed up with what I was doing—working in information technology with a huge commute over to the west side—and I looked at this and it just seemed like a better way to lead a life. It was important to me to stay in the Heights.”

This spring represents another milestone, as Cain Park Bicycle is expanding into the adjacent storefront, long occupied by Dominic’s Barber Shop. “Dominic retired last year and we’ve just been totally maxed-out space-wise,” Schumacher explained. “We will be able to add about 50 bikes to the sales floor, so we’ll be able to spend more time with the customer and less carrying bikes up and down to the basement.”

Local bike shops face competition from online sellers and big-box discounters. Mike Bednarz, head mechanic, explained, “When the Walmart customer comes in and asks why our prices are more, I explain the higher quality of our components, our warranty that backs it up, the professional assembly that backs it up. You weigh everything and pretty soon you say, OK, I can buy a $150 bike or a $450 bike, but the long-term maintenance cost of the $150 bike will quickly escalate and it won’t be as reliable or, most importantly, be as much fun to ride.“

Competing with mail-order retailers for decades has helped local shops prepare for the Amazon age. “Competition from the Internet is a challenge,” Schumacher acknowledged. “We can’t really compete on price, so we compete on service and quality and convenience. One thing we did right from the get-go was fix people’s bikes, right in front of them, and try to educate them as to what a better ride you can get. It’s worked out—a lot of people have come back and got serious bikes. We even get a fair amount of business from people who bought their bike online and have us build it for them, and we’re fine with that.”

In all, Schumacher finds this to be a promising time to be expanding his business here. “The proximity to the universities and the hospitals is good for bike commuters, and Cleveland Heights itself is a pro-cycling community. We’re pretty close to the Shaker Lakes trails. We see a lot of people coming in who want to get out and do some exploring—a lot of wives dragging their slightly overweight husbands in to get a decent bike and go out and have some fun. The university student market is good, kind of a continually refreshing customer base. We’ve seen much more interest in electric bikes.”

Greg Donley is a member of the Heights Observer Advisory Board and a longtime cyclist.