A taste of Coventry 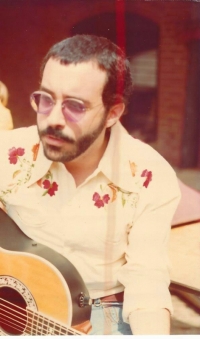 The author, sitting in the CoventryYard courtyard, around the time he started working at Rocco's Market (and, thus, stopped being a starving artist), with the original Mad Greek in the background.

I was a real “Coventry” kid: I was born and grew up on a street nearby, and my mother started taking me shopping on Coventry from the time I was born (well, maybe a few weeks later . . . ). I walked up and down that street to and from Coventry Elementary School every day for seven years. Then I hung out on Coventry during my early teens, before the place was cool. And then, when it became a hippie haven, I was just the right age for that, so there I was.

Then I worked on the committee for those giant Coventry Street Fairs of the late ‘70s (I booked all the musical artists for a few years). I lived in seven or eight apartments on or around the corner from Coventry. And I worked at Rocco’s Market.

Rocco’s was situated in the courtyard of the former CoventryYard building, for a couple of years, starting in 1976, when it opened. CoventryYard, the building that now houses the Grog Shop and Inn on Coventry, was home to Tommy’s, the Light of Yoga Society restaurant, the original Mad Greek restaurant and the original Arabica coffee store—a tiny space from which Carl Jones only sold roasted coffee beans, before he moved the business to a much larger space upstairs and turned it into a sit-down coffee shop. There were also boutiques and art galleries in the building, before the 1978 fire that forced most of the businesses to either close or reopen elsewhere.

Tommy’s moved down Coventry. That second Tommy’s location burned as well, after which the restaurant moved to another space nearby, where it still thrives. The Mad Greek moved to Cedar Fairmount (into the space formerly occupied by Damon’s and then the Brown Derby restaurants), where it remained open until a couple of years ago. That space is now the popular taco restaurant Barrio.

The Mad Greek’s spot in CoventryYard was on the ground floor (the Coventry Road entrances were actually on the second floor, as they are today), in the back, looking out onto the building’s courtyard. Across that courtyard was a smaller structure that had formerly served as the building’s garage, when the CoventryYard building was originally constructed as an apartment house.

Rocco’s was a beautifully re-imagined space (you’d have never known it had once been a garage by looking at the inside), designed by its owner and operator, Eugene Rocco. Rocco’s—probably ahead of its time—sold a wide array of unusual and colorful fruits and vegetables, Amish cheeses, fresh fish, deli meats and sandwiches (served on bagels). Rocco was always quick to offer samples of the exotic fruits, whipping out his pocketknife as soon as a customer inquired about anything there.

Rocco’s food—the produce and prepared fare and everything else (he even got a peanut roasting machine)—was the best in the area. I worked at Rocco’s during the day and played in rock bands at night. Neither one paid a lot, but I ate really well during that time. I was one of the few starving musicians around who actually started gaining weight.

Rocco’s sandwiches were so good that the other area restaurant owners, managers, cooks and servers would come in at lunch, and throughout the day, to buy them. When the Mad Greek opened, Loki Chopra, the male half of the Indian and Greek couple who owned it—and the Indian half—started coming to eat at Rocco’s several times a week. After a couple of weeks, I said to him, “I figured out why you come in here so much: You heard there was a ‘new deli’ here.” (Okay, well he thought it was funny, even if you didn’t.)

You could get to Rocco’s from the CoventryYard building, or from Lancashire Road, behind the market, or from the alley off Coventry that ran next to Tout Le Monde (the French restaurant), which became Chester’s and then Turkey Ridge and then the Winking Lizard. Before that space housed Tout Le Monde, it had served as an Eastern European Jewish deli called Leo’s since the 1940s.

My uncle Harry Budin started Leo’s. In a way. Because Harry, my grandfather’s brother, owned another deli down Coventry a little, called Budin’s Delicatessen (which later moved to Shaker Heights). Leo worked at the Budin’s on Coventry. One day, when Harry had just come back from a vacation, a regular customer came in and ordered a corned beef sandwich. He told Harry, “And make it really huge, just like Leo does.”

That was the last moment Leo was employed by Budin’s. So Leo opened his own place. That’s how my uncle Harry started Leo’s—where you could get a great corned beef sandwich and a tall, cool glass of spite.