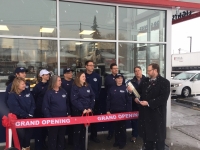 The University Heights Swensons is the first location in eastern Cuyahoga County and the biggest yet of the Akron-based business’s eight locations.

Swensons hired more than 50 employees to staff its new location, including students from John Carroll University.

The Northeast Ohio chain has come a long way since its first store, which Wesley T. “Pop” Swenson opened in the Wallhaven neighborhood of Akron in 1934. Pop Swenson’s vision was to provide the best hamburgers possible by using fresh, in-house ground beef. Forbes magazine has recognized Swensons as offering “America’s Best Cheeseburger.”

The University Heights restaurant is at the northeast corner of the city, at the intersection of Cedar and Fenway roads. It is part of the Cedar-Green Business District, home to Jack’s Deli and Restaurant, Heinen’s grocery store, Tibor’s Kosher Meats, BarNone, and Los Arcos.

Crystal Griffith, director of marketing for Swensons, said in an e-mail, “We feel very fortunate to have obtained the space in University Heights and we’re excited to be part of the University Heights community. The warm welcome we’ve received has been overwhelming.”

Brennan echoed these sentiments, saying, “University Heights is full of family-run businesses and Swensons is a great addition to our business community.”

Parking for the new location has been an issue. Swensons has 70 parking spots, where Galley Boy lovers can be served curbside, but some employees have parked on Fenway Road, a street shared by the cities of Beachwood and University Heights. Worried about the light and sound coming from Swensons during its hours of operation, Beachwood residents have asked for these issues to be considered.

At the Jan. 2 University Heights City Council meeting, Mayor Brennan assured concerned residents and Beachwood Councilman James Pasch, who were present at the meeting, that he and council would continue to listen and engage in conversations regarding the site, and work with Beachwood officials to address the concerns of residents.

Patrick Grogan-Myers is the community development coordinator for the city of University Heights, and works with residents and businesses to promote University Heights as a great place to live, work, shop and play.