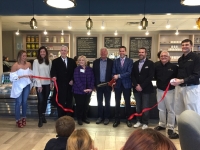 This year, Motorcars is bringing another first to Cleveland Heights—though not as environmentally significant as the installation of its 1,240 solar panels—opening the region’s first full-service donut and coffee shop to be located on the grounds of a car dealership.

Daylight Donuts & Coffee, located at the front of the former Pontiac building at 3077 Mayfield Road, just east of Motorcars Honda, is scheduled to have its grand opening on Jan. 26, with a soft opening the day before.

The donut shop will offer inside sit-down space as well as a drive-up window. Plans call for it to be open from 6 a.m. to 8 p.m., seven days a week, and the Gile family expects that Daylight Donuts will employ about 18 full- and part-time employees.

With about 1,000 stores across the country, Daylight Donuts has locations near Columbus and Cincinnati. This will be the chain’s first franchise in Northern Ohio.

Unlike some other Daylight Donuts shops, the Cleveland Heights franchise will also offer a variety of custom coffees, sourced from a local roaster, Six Shooter Coffee, as well as a selection of sandwiches.

Daylight Donuts is already partnering with other local businesses. CLE Urban Winery is offering "donuts for grownups," donuts from Daylight filled with one of the winery's fruit-infused wines, on sale Fridays and Saturday's at the winery.

A couple of years ago, the Gile family went to Cleveland Heights City Hall seeking approval of plans for a $250,000 renovation of the then-vacant former Pontiac building, to turn it into Motorcars’ collision center, which is open and will continue to operate in the back of the building.

According to Matt Gile, son of Chuck Gile, the city’s planning department reviewed the renovation plans and asked if the front of the building could be activated with a retail use. The family responded with the proposal for Daylight Donuts, which it will own under a separate company than Motorcars.

Does Motorcars expect to hear customers saying, “I’ll have a Honda Accord with my glazed donut and latte?” Not quite. But Matt Gile did say that the donut shop may make some people more familiar with the car dealership.

Robert Brown is a city planner with 40 years of experience, including nine years as Cleveland's city planning director. A resident of Cleveland Heights for more than 40 years, Brown is a member of the FutureHeights Board of Directors.