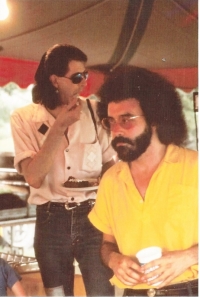 The author (foreground) backstage at a big rock festival in 1979, with the Cars' Ric Ocasek behind him, in—where else?—the food tent.

I ate a stranger’s dinner—on purpose—when he wasn’t looking. It was around 1975 and I was playing music at earth by april, the vegetarian restaurant at the corner of Cedar and Lee, a space into which the Cedar Lee Theatre eventually expanded. They spelled earth by april in all-lower-case letters because the name came from an E.E. Cummings poem, and that’s what he did.

I played and sang my songs at that place, by myself, many weekend evenings in the ’70s, when I was in between rock bands. I sat on a high stool against the long wall of the main dining room, about three-fourths of the way back.

This one freezing-cold January night, there were few diners and by about 10 p.m. there was only one customer there. He sat in the front of the room, the Lee Road end of it, as far away from me as possible. He ordered his dinner and waited for it, ignoring me (he wasn’t the only one who did that back then).

The lone waiter still working that night brought the man’s dinner and disappeared into the kitchen, where I would have preferred to be, because there was heat and food back there, and I was cold and the proverbial starving artist.

After a few minutes, the man stood up, put on his coat and hat and left. I immediately stopped playing—mid-song, mid-word—put my guitar on its stand, walked over to the guy’s table, picked up his nearly full plate, carried it to the opposite end of the room, sat down and ate the whole thing.

Just as I was finishing the last bite, the man returned, new pack of cigarettes in hand. He looked at his table, stomped into the other room and came back with the waiter in tow, pointing at the site of his missing dinner, gesturing wildly and saying words I couldn’t discern, but I understood.

I could tell by the waiter’s motions that he was explaining that the bus person must have taken the food away. While they were involved in discussion, I quietly took the plate into the kitchen and left it near the sink.

I went back to playing music and watched as the waiter brought the guy a new meal, which he ate while smoking his fresh, new cigarettes. (I guess he was eating in a vegetarian restaurant because it’s supposed to be healthier for you.)

Some restaurants that hire musicians feed them and some don’t. Before earth by april, I played at Tout Le Monde, the French restaurant on Coventry (later Chester’s, Turkey Ridge, the Winking Lizard, and currently Seafood Shake). Tout Le Monde opened in 1972, the same summer that Tommy’s began serving food at a seven-stool counter in the back of Ace Drugs (where the Grog Shop currently resides). I got on the menu—the “DB”—that summer, and I’m still on it.

About a year later, Tout Le Monde opened a bistro in its basement and that’s where I played, in between rock bands. They didn’t feed me, either, officially. But I started hanging out at the place during the afternoons, when the kitchen staff and servers didn’t have much to do, and became friends with those people, and they gave me food.

One incident that stands out, from my time there, was when a locally famous disc jockey came in one Saturday night. He had already been on the air for 20 years—from the early days of rock radio—and was then playing easy-listening music, which he continued to do for another 30 years. I made a point of recognizing him during my first set, introducing him to the audience.

After I played several songs, and he drank several glasses of wine, he walked up to me and asked, in his big, deep, mellifluous radio voice, “Would you like me to announce the time?” I said, “Ummm . . . sure.” He took the mic, looked at his watch and intoned, “It is now eleven-oh-two.”

I said, “Thanks.” He winked and made his way back to his seat. All but three or four people in the place ignored him; those three or four glanced at their watches and looked at me to see if something was going to happen. I shrugged and went into my last song before my break. And then I sat down to eat.

I remember every gig I’ve ever played—concert hall, nightclub, festival, restaurant or bar—and every meal I’ve had at each venue. That’s the other part of being a musician.