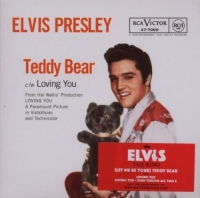 Elvis's record "Teddy Bear," one of the singles in my best present ever. Now I buy actual teddy bears for my grandchildren.

I got a gun. It was holiday present. It was plastic. And it was pink. And it shot rubber bands. I was 7 years old. The gun came with a target and I had fun shooting at it. Neither the gun nor the act of shooting it reminded me of the dozens of cowboy TV shows and films that had taken over the airwaves and the movie theaters at that time, the mid-1950s.

Many people who grew up back then are fond of saying, “Well, our generation played with toy guns and we didn’t grow up to be murderers.” Except for a couple of things they seem to have missed: Number one, yes we did, a lot of us; and number two, unlike today, until we were much older, there weren’t real guns everywhere and easily accessible to us.

But this isn’t about guns. It’s about Christmas and Hanukkah presents.

In this column one year ago, which was not about presents, I mentioned my favorite present ever, from Hanukkah 1957—a stack of about 35 records, the big hit singles of that time. I’m going to name some of them again, because (a) you wouldn’t remember what I wrote last year, (b) it was one of the best eras in early rock and these were great records, (c) if you were listening to pop music at that time, you’ll like this list, and (d) this column is called Songs and Stories, so these are the songs.

Here are 20 of the records: “Peggy Sue,” “Oh Boy” and “That’ll Be the Day” by Buddy Holly; “Wake Up Little Susie” and “Bye, Bye, Love” by the Everly Brothers; “Jailhouse Rock” and “Teddy Bear” by Elvis Presley; “Keep A-Knockin’” by Little Richard; “Great Balls of Fire” and “Whole Lotta Shakin’ Goin On” by Jerry Lee Lewis; “Rock and Roll Music” by Chuck Berry; “Be Bop Baby” by Ricky Nelson; “Searchin” by the Coasters; “You Send Me” by Sam Cooke; “At the Hop” by Danny and the Juniors; “Honeycomb” and “Kisses Sweeter Than Wine” by Jimmie Rodgers; “Silhouettes” by the Rays; “Diana” by Paul Anka; and “Chances Are” by Johnny Mathis.

But, to paraphrase what I said above, this is not about records. It’s about Christmas and Hanukkah presents.

My wife and I are both non-practicing members of the religions of the families in which we were raised. When our children were young, as Christmas and Hanukkah (or Easter and Passover) approached, some of their friends’ parents, knowing our situation, would ask me, “So, what do you do for the holidays?” And I would answer, “A little of neither.”

What that actually meant was that we participated, for the most part, in the cultural, but not the religious, aspects of the holidays—a Hanukkah latke party with the extended family, and also a Christmas Day brunch with the immediate family, plus my Jewish mother (hey—what else does she have to do that day?). Both a Christmas tree and a menorah in the living room. A couple of presents, for the kids, for each holiday. And a Christmas Eve service at whichever church had the best music (we’ve pretty much settled on Church of the Covenant in University Circle).

The kids always kind of liked their gifts, and we kind of liked the ones they gave us, especially the hand-made ones. But then someone in the extended family got a better idea. We would gather for a Hanukkah party, divide into a few groups of adults and kids, and pool our money in each group. A few adults would then make a little presentation about a favorite charity and then the kids would vote on which one to donate that money to.

The person who brought that idea to us, from a similar program at her synagogue, recently explained, “At temple, it was also an exploration of Hillel's questions: ‘If I am not for myself, who will be for me? [But] if I am only for myself, what am I?' And ‘If not now, when?’ It got us to grapple with how to choose charities based on the dilemma that if Jews didn't support Jewish charities, who would? But, if we only supported Jewish ones, how could we call ourselves citizens of the larger society?”

It was a good idea. We did that for a few years, until the kids started going off to college or leaving home for other things. Those kids are all adults now. Some of them have kids of their own. I’m not buying my grandkids guns, plastic or otherwise. I don’t need to buy them music, because that’s obtained differently now. They’ll grow out of the toy stage, which will make me sad, in some ways. But I’m hoping the charity idea returns, which, of course, will make me happy.