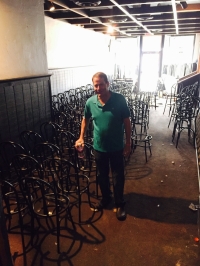 Brad Po stands with the 87 chairs he helped repaint.

Longtime Cleveland Heights residents and restaurant enthusiasts Brad Po and Jeff King took their time shopping around for the perfect spot in which to open their own pub and eatery. When the two storefronts at the corner of Lee and Kensington roads, formerly occupied by The Tavern Company (before that business moved across and down Lee Road), became available, both men saw it as an opportunity to revive the iconic, local space as a neighborhood hangout.

They hope to open Kensington Pub's doors for business by December of this year, but Po is hesitant to name a definitive date.

"We are working to revitalize as much of the original charm as possible," Po said.

One of their first tasks was to strip and refinish both the original bar and all of the original dining tables. The result is a glossy sea of wood that both dresses up the space while revealing its long history—including old nicks and cigarette burns beneath the shiny new coats of polyurethane.

They also repainted all 87 dining chairs, and Po's girlfriend is currently reupholstering each seat to match accents in the dining rooms. The entire interior will be repainted in the next couple months, including parts of the ceiling that were formally concealed by foam board, which, in keeping with Po and King's vision, should open up and brighten the space.

Their most ambitious design plans involve reinstalling windows on the Kensington Road side of the building, and potentially opening up space between the front of the restaurant and the outdoor patio on Lee Road. Specifically, they are discussing plans with their landlord to install a garage door or inside/outside bar in the spring, in what is now a front window. King expressed much pride in "being able to give the place a facelift."

The partners are also ordering equipment, supplies and menu items. Po explained that Kensington Pub will be a scratch kitchen. "We'll offer good, upscale pub fare; no heavy or fried foods," he said. "A diner will be able to order a traditional sandwich, burger, or salad, or try something off of the moderately higher priced a la carte menu."

Po wants customers to have "lots of options to eat relatively inexpensively or indulge." The restaurateurs don't plan to keep an industrial freezer on the premises, so "the food is guaranteed to be fresh."

Kensington Pub will be open seven days a week, with food served until 2 a.m. on some nights, and there will be a regular Sunday brunch offering. As Po puts it, "We want everyone to feel comfortable: families, students, people returning late from work or out-of-town."

Po and King said they have marveled at the "couple hundred" people who have already peeked their heads in or stopped by to talk, and they're excited that so many have expressed enthusiasm to have a neighborhood pub and restaurant once again fill the vacant corner space. "We haven't put any papers in the window because we want people to see the changes we're making."

Jessica Schantz is the Heights Observer's e-news manager and a longtime resident of Cleveland Heights.