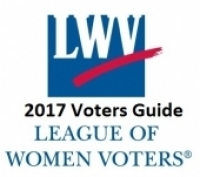 As the Nov. 7 Election Day approaches, Heights voters can access several resources to become informed about local candidates and issues.

One such resource is the 2017 Voters Guide, sponsored by the Heights Chapter of the League of Women Voters (LVW) and FutureHeights. The guide was a special insert in the October issue of the Heights Observer. Additional copies of the printed guide are available at Heights libraries and other locations around town.

An online version of the guide, available at www.heightsobserver.org and www.vote411.org, contains additional questions and answers from each candidate, as well as a link to videos from the Oct. 18 LWV/FutureHeights Candidates Forum.

The Oct. 18 forum featured candidates for all of the Cleveland Heights and University Heights contests.

Four candidates—none incumbent—are running for three seats on the Cleveland Heights-University Heights Board of Education: Tiera D. Briggs, Dan Heintz, Malia Lewis and Jodi L. Sourini. James A. Williams, who attended the Oct. 18 forum, is listed as having withdrawn from the race on the Cuyahoga County Board of Elections website.

Five candidates are running for four seats on Cleveland Heights City Council. They are incumbents Jason Stein, Cheryl Stephens, Michael Ungar and Melissa Yasinow, and challenger T. Nadas. There is also a write-in candidate: Ray Douglas Wilson. Wilson did not respond to questions for the LWV/FutureHeights 2017 Voters Guide, nor did he attend the Oct. 18 candidates forum.

The city of Cleveland Heights sponsored the videotaping of the Cleveland Heights portions of the Oct. 18 event, which includes the CH-UH school board candidates, CH Municipal Court Judge candidates and Cleveland Heights City Council candidates. That footage will air on the city’s YouTube channel and on its cable access channel, Spectrum Cable Channel 1020, at 7 p.m. each night until the election.

League of Women Voters sponsored the videotaping of the University Heights portions of the Oct. 18 forum. Video of both the UH and CH segments of the event are available online at www.heightsobserver.org and www.vote411.org.

Noble Neighbors also hosted candidates forums to gauge candidates’ thoughts on issues specific to the Noble neighborhood. Links to videos of the Oct. 3 forum for CH City Council candidates and the Oct. 10 forum for school board and municipal judge candidates are available at www.nobleneighbors.com.