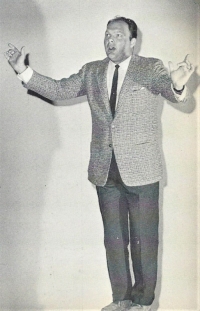 School always started in September when I was a kid—usually the Wednesday following Labor Day. But it was October, every year, when I established whom I was going to be that year. I was a different person just about every school year, from the sixth grade onward.

I was a guitar-playing misfit, then a greaser, a preppie, a Mod, a hippie, a (faux-)intellectual druggie. Each one brought with it a new set of friends, and clothes. And hairstyle. Through it all, some things remained constant: I was always a joker (usually for some sort of pre-emptive self-defense purposes), a musician and music lover, and a writer.

I went to Heights schools—Coventry, Roosevelt and Heights High—from kindergarten to almost the end of 12th grade, and in all that time, I had exactly two teachers who encouraged me. I guess I can’t blame the rest of them, though, because I always made it clear that I didn’t want to be there and didn’t care about anything that was happening there. Of course, on the other hand, that’s the kind of kid a teacher should try a little harder with, rather than just giving up, by October, and ignoring for the rest of the year.

Though, also, it was the height of the Baby Boom and there were too many kids for them to handle, so they . . . Wait a minute—why am I making excuses for all those teachers who gave up on me so early?

I’m not saying there weren’t other teachers in our school system then who noticed kids’ special skills and talents and proclivities, and tried to encourage them in those areas. There may have been, and probably were, many others. I’m just saying that I came into contact with only two of them.

My ninth-grade English teacher, Charlotte Bossinger, was one. I remember that class as being especially rich, cramming quite a bit into the school year. We studied The Odyssey; a Shakespeare play (I don’t remember which one, because I read a few of them around that time), which we then went to see at the Hanna Theater; short stories; poetry; and creative writing. That was a lot for one school year, and it provided a great overview of literature for a 13- or 14-year-old.

More significantly, Bossinger gave me enough positive feedback on the writing I did in class that I was emboldened to bring in short stories and poetry I had written at home (or, probably, during other classes) for her to evaluate. She actually took the time to discuss them with me after school. And she sincerely encouraged me to keep writing. I still remember certain lines she particularly liked. Her encouragement literally was a turning point, and maybe the all-important first one, in a series of decisions that led to my becoming a professional writer.

A week before school officially began, in my 11th-grade year, the Heights A Cappella Choir ran a choir “camp,” meeting twice a day, morning and evening, for a couple of hours each. It was my first year in the choir (I was not allowed in, due to my grades, the year before), and it was also the first year for our conductor Clair McElfresh.

He had us try a couple of things to adjust our sound, and then we sang that A chord again. The sound was so dramatically different that it—that one moment—changed the entire course of my life. I had been heading down a pretty destructive path, and missing increasing numbers of school days. This thing was intriguing enough that I wanted to stay and find out what else could happen. I mean, it happened in the first minute, and we had a whole school year ahead of us.

The whole experience did not disappoint. Mac also encouraged me to sing solos, write arrangements for vocal groups within the choir, become part of the planning team for concerts, and take a leadership role in the organization.

I even brought my grades up—just enough—to stay in the choir. It was the one and only reason I ever stepped inside the school. Within a year after I left Heights High, I had already begun a career in music—doing all the things in real life that Mac had me doing in school—and another career in writing. Half a century later, those are both still my vocations.

Two teachers. That wasn’t a lot. But it was plenty.