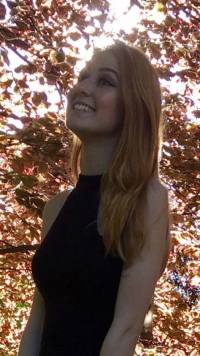 Kayleigh Mooney could light up a whole room. “She was such a dynamo,” said her father, Kevin. “She has a big, big personality, almost too big for this world.”

He switches back and forth between present and past tense when discussing his 15-year-old daughter, who died on Aug. 17. While her physical self is gone, her presence is very much alive for those who loved her, including her father, her mother, Jessica Klein, and her 12-year-old brother, Nathaniel.

“I make it through each day by walking in her light,” said Kevin. “It’s the only thing that sustains me.”

Jessica described her daughter as gentle but super smart: “She was such a deep thinker. And really, really funny.”

“Parenting her was an amazing experience,” said Kevin. “She was so easy to love.”

Kayleigh’s friends feel the same way. Luisa Soreo, a sophomore at Heights High, met Kayleigh in seventh grade at Roxboro. “I was the new girl, and Kayleigh was surrounded by friends she’d had since kindergarten. But she took me in and was my first real friend. We bonded and could talk about anything.”

The two were inseparable during the summer of 2015, on the cusp between childhood and adolescence. “We could be silly and have dance parties in the front yard, but we could be serious, too. I’m comforted by the thought that she was there for me during the best and worst times of my life.”

It’s safe to say that Luisa was there for Kayleigh during her best and worst times also.

Described by her parents as an “old soul,” Kayleigh had faced enormous adversity. The victim of a violent sexual assault, Kayleigh had struggled to regain her sense of self and her place in the world. She spent the past year supported by professionals, friends, family and the therapy dog she named Spirit—“to help me reclaim my spirit.”

Her family believes that she was well on her way to doing just that. “She had been wounded, but she emerged and was thriving,” said her father of the progress Kayleigh was making before her death. “She was incredibly courageous. And it really seemed like she was ready to take on the world.”

Set to start 10th grade at Beaumont School, Kayleigh spent two weeks in August on Georgia’s Jekyll Island with her family. They had been returning to the same stretch of beach for years, and Kayleigh, a passionate animal lover, had always hoped to witness the hatching of the sea turtles. She missed it again this year, but, accompanied by her father and brother, came across a recent hatching and could still make out the trails the tiny turtles left in the sand on their way to the sea.

Kayleigh spontaneously started searching ghost crab holes and came across a baby turtle that had fallen and was trapped. She dropped to her knees and carefully dug, finally scooping out the almost-doomed turtle and setting it free. “See Daddy,” she said through her tears, “We all fall into dark holes but we can all be saved.”

The Georgia Sea Turtle Center has named a wounded sea turtle Kayleigh Kakes in honor of the donations made in her memory.

Kayleigh had been out with her friends on the night of Aug. 17, in the waning days of summer vacation. “Teenagers were running around, it was dark, she may have been distracted,” her father explained, when Kayleigh stepped into the road from behind a telephone pole and was struck by oncoming traffic.

Kayleigh’s friend Caroline Imka witnessed the accident and had the presence of mind to call Kevin before she called anyone else. “I am eternally indebted to Caroline,” he said. Kevin made it to the scene in time to cradle his daughter’s head and whisper in her ear before she took her final breath. “I know the last thing she heard was her daddy telling her he loved her. Caroline gave me the greatest gift of my life.”

Kayleigh’s parents don’t hold anyone culpable for their daughter’s death—not Kayleigh herself and not the car’s driver. They simply see it as an extraordinary misfortune.

“If any one of the factors that night had shifted, even in the slightest, two or three seconds in one direction or another, Kayleigh would be here right now doing her homework,” said Kevin, gesturing to the dining room, empty except for poster-sized images of his strikingly beautiful daughter.

Instead, Kayleigh’s parents, brother, extended family, and countless friends are mourning her loss.

“The unthinkable happened,” said Kevin. “And I don't know how we’ll bear it. But Kayleigh would want us to keep moving." He is telling himself this as much as he is telling anyone else. "We honor her light by living.”