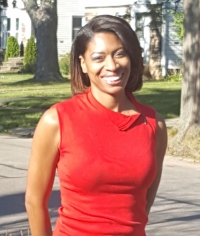 1. Unique qualifications: I have been heavily invested in our schools for 13 years. I have insisted upon being active within the schools, even when working multiple jobs. It is that important to me. In that time I have noticed that all too often many of the people who tend to have a hand in creating the environment in the school often have no idea what daily realities a significant part of the student population face. I want to serve on the board to bring that perspective to the conversation while we discuss enacting policy that affects the families who's voices are not often heard. I am adept at looking at issues practically and without allowing my emotional bias to cloud my judgment. I have had to this this for the last 12 years as a paramedic.

2. Top issues: I believe the board must address equity and the reasons why students of lower socioeconomic status do not typically fair as well as their wealthier classmates. There are relatively simple steps that the district can take to help those students, such as late buses for students who need extra help, but cannot stay to get that help because their parents are unable to pick them up if they miss their bus. It would also allow them to take up sports. Multiple studies have shown, students who participate in extracurricular activities usually have better grades & test scores. The other issue is a varying discipline policy that has historically been lax. When young children get away with infractions, they are more likely to continue that behavior. Instances of assault going unpunished in the elementary & middle school pave the way for worsening behavior in the high school. There must be a discipline policy enacted uniformly across all schools. These students also distract other students.

3. Budget overrun: The Board approved the forward movement of the plan with only 50% of the architectural pans completed. That falls squarely on their shoulders. They are not architects and they relied on owner's representatives to assist in the process. Maybe the owner's representative advised they proceed, but I would hope they would do their own research, and know that it is not (from my research) the norm to remodel an almost 100 year old building with only 50% of the research done. That disappointed me. I plan to ensure I do my own research in interacting with the owner's representative and construction company and ask tough questions. I also plan to be more budget conscious. The board approved replacing a fully functioning door because it was dented and ugly. The door was on the roof. No one will see it but maintenance, and maybe fire department personnel. I would have voted No. Little things add up and we must remember that even dealing with million dollar budgets.

4. Education policies: I do not like the testing as a way to evaluate teachers. It has been demonstrated that testing really reflects the economic status of the student body more so than their abilities. You could give the same teacher a group of students whose parents earn 6 figure salaries and students whose parents are on government assistance. It is all but guaranteed that one class will fair worse despite having the same exact teacher, and being in the same school. Public dollars should not be used to fund charter schools. I would be more open to charter schools if they were held to the same exact standard as public schools.I would still not like them taking public funds for charter schools, but could more clearly see the other side of the argument for them. As they are set up now I am firmly against them. Reducing state/federal funding is detrimental. It also widens the gap between the neighborhoods. When you rely heavily on city tax dollars, the rich get the best and the poor struggle even more.