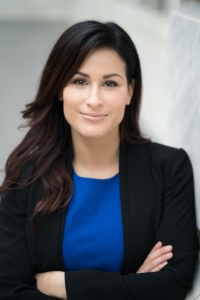 1. Judicial experience: I have never been elected or run for office but I served as judicial staff attorney  to Judge Nancy A. Fuerst in the General Division of the Cuyahoga County Court of Common Pleas for three years: 2010-2013. During my term with Judge Fuerst, she was the Administrative Judge for the County. I helped her manage the court’s docket, mediate cases, conduct legal research, and make decisions on cases. I also presided over her post-judgment execution hearings and the initial Civil Stalking Protection Order hearings for her and many of the other judges in the Court.

2. Unique qualifications: I have practiced in civil litigation on both the defense and plaintiff’s side; in criminal defense (I currently work for one of the top criminal defense firms in Ohio, Synenberg, Coletta & Moran, LLC), and for the Court. I am comfortable handling a variety of different legal matters and have done so on behalf of nearly every type of entity that would come before a municipal court judge. I have strong legal research skills and broad legal knowledge that would help me administer justice fairly and effectively. I also have the temperament, work-ethic, and patience to handle a large case load without taking for granted the rights of others and the desire of many court parties to be heard.

3. Why running: After my term with Judge Nancy A. Fuerst, I became inspired to run for judicial office. She was an incredible mentor, along with Judge Joan Synenberg, who served across the hall from Judge Fuerst. Both of these women taught me that as a female attorney in a male dominated profession, I could be a leader in the legal community, and I could make a positive difference in the lives of others by administering justice fairly, patiently, and compassionately. Upon realizing that Judge Buchanan would be retiring at the end of his present term, I realized it was my opportunity to serve my Cleveland Heights Community. My goal is to help modernize the Cleveland Heights Municipal Court, make it more accessible for parties and attorneys, and implement new programs to help facilitate justice. Cleveland Heights is the only suburban court in Cuyahoga County that does not refer cases to Cleveland Municipal Drug Court, under a federally funded program, and I hope to change that so non-violent offenders who qualify can potentially graduate from Drug Court rather than become incarcerated. I also hope to introduce electronic filing, and allow parties to handle preliminary matters in their cases either electronically or telephonically so as to prevent many individuals from missing time at work for routine court proceedings. My main objective is to administer justice fairly without ever losing focus of the effect judicial decisions can have on an individual’s life or business’ success.